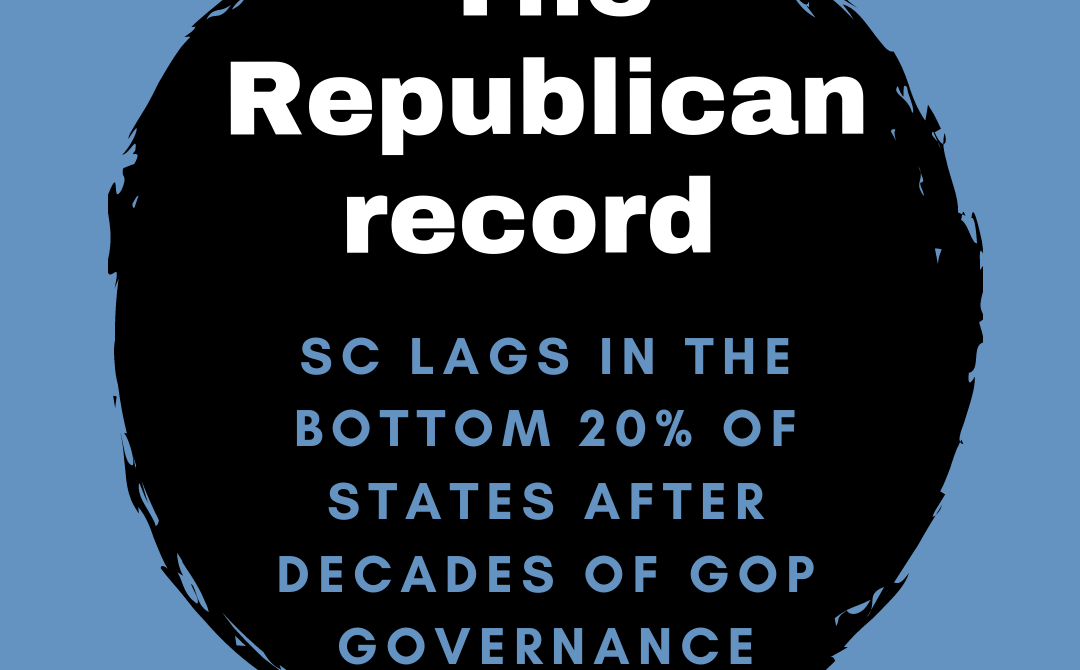 The Republican Record: On gun violence

Who Cares About Gun Violence in South Carolina?

South Carolina has been governed by Republicans for decades – in some parts of the state – for generations. In that time, the state has never crawled out of the basement on any major metric of governmental success. From education to GDP, the state languishes in the basement while other states, including Georgia, Florida, and North Carolina, progress. For the next eight weeks, we’ll explore what exactly South Carolina has gotten from our Republican leadership – and why we can and should demand better. To kick us off, we’re looking at gun violence. How safe are we in Republican hands?

Decades of Republican domination of South Carolina’s state and local governments have yielded many superlatives, but not necessarily the kind that residents can be proud of. Our state consistently ranks near the top of the list in some of the nation’s most damning categories, with one of the worst being gun violence. The state’s Republican majority has made it clear that it has no interest in such common-sense gun legislation as closing the “Charleston loophole” that allowed the Mother Emanuel Church murderer to illegally acquire a gun, or “red flag” laws that temporarily take guns from individuals deemed a threat to themselves or others. Meanwhile, as the national rate of gun homicides increased 18 percent in the decade ending in 2018, the rate in South Carolina increased by a staggering 51 percent, according to Everytown, a blanket organization that advocates for gun safety. https://maps.everytownresearch.org/everystat#SouthCarolina

Worse still, surveys show that elected Republican officials have actively supported extreme gun laws that are out of touch with the views of a majority of Americans and would make South Carolinians even more likely victims of gun violence. In just the last couple of legislative sessions, Republicans in the state Senate and House have put forward bills to allow: the arming of schoolteachers; permitless concealed carry; reciprocal concealed carry for out-of-state visitors; and open permitless carry.   Proponents argue that the “rights” guaranteed in these bills promote safety, but there is no way to put a positive spin on the data, which tell a devastating story. According to Everytown:

In contrast to Republican inaction, a growing number of Democratic candidates – well aware that their supporters comprise a significant share of the roughly 50 percent of South Carolinians who are gun owners — have expressed support for gun laws that lower the risk to the state’s residents.

Far from calling to undermine South Carolina’s traditional sporting culture or to confiscate all guns, as their critics often claim, these candidates stand for the kinds of laws that would mandate criminal background checks for gun sales, close the “Charleston loophole,” prohibit high-capacity magazines, remove guns from convicted domestic abusers, and require the secure storage of guns in the home. These are hardly controversial measures, and certainly in line with the Second Amendment’s provision for a “well-regulated militia.”

Statewide, nearly 30 Democrats running for either the South Carolina Senate or House, including a half-dozen in the Greenville area, have committed themselves to “governing with gun sense as a priority,” according to Gun Sense Voter, a national clearinghouse affiliated with Everytown for Gun Safety. Democratic Presidential candidate Joe Biden and South Carolina Democrats running for national office, including Senate candidate Jaime Harrison and five House candidates, including Kim Nelson (SC-4), have made the same commitment.

As of this writing, no Republicans in South Carolina have been designated as gun sense candidates. Why not?

Tomorrow: Meet Melody McFadden, a minister, Army veteran, gun owner, and gun violence survivor, tell her story of tragedy and advocacy and why it matters for all of us.