This profile of Helen Pendarvis, candidate for State House District 35, is one of a series on Democratic candidates running for office who are not currently incumbents, designed to help voters understand who they are and what they stand for.

It wasn’t just one thing that prompted Helen Pendarvis to run to represent District 35 in the State House. It wasn’t just her lifelong advocacy for children’s well-being, or her commitment to help the working poor, or her desire to see the local economy prosper.

It wasn’t just because she woke up on November 9 two years ago to the reality of a Donald Trump presidency; or because of the seemingly daily drumbeat of accusations of sexual abuse in the media; or because, as she puts it, “The guy doing the job s—ks at it.” It was a combination of these things and a “bulldog-with-a-bone” mentality that drove Helen to step up. 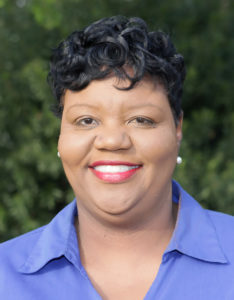 Like many in the flood of first-time female candidates for office all over the country, running for election was not part of Helen’s plan. A natural introvert, she thought that she could make a difference by voting, participating in events like the Women’s March, and writing and calling her representatives. But she watched as local schools continued to be underfunded, local infrastructure continued to crumble, homelessness seemed to grow, and her representative, Republican Bill Chumley, remained indifferent. Eventually, “introvert” Helen gave way to “live out loud” Helen, and, with encouragement from friends and mentors like former state representative Harold Mitchell, she made the transition to candidate.

Also like a lot of first-time candidates, Helen’s personal experiences of struggle played a part in her decision to run. Her father died suddenly when Helen was 10 years old and she ended up in the care of a brother 17 years her senior, who was serving in the military and raising three children of his own. That situation introduced her to the concept of “tough love,” as well as the benefits of the structure her brother provided. As a young mother years later, Helen recognized that she was in an abusive marriage and, for the sake of her 6-month-old son, endured a difficult divorce to put her life back on track. “Everything I did after that,” Helen says, “every job and every decision, was for my son.” She is quick to add that she now has that same passion for her 9-year-old daughter Michaela.

If there was an “Aha!” moment for Helen, it was when she decided – 20 years after high school – to resume her education in a field that matched her passion for children’s welfare. She enrolled in the Legal Studies program at Loyola University of Chicago in 2013. Although much of the coursework was online, completion of the degree required her to make the 20-hour roundtrip commute to Chicago seven times each academic year for on-site instruction. Several long drives and many hours of study later, she earned her Master’s in Jurisprudence in Child Advocacy Law and Policy. Helen now works as a paralegal for a Greenville law firm and serves as a volunteer guardian ad litem for the 12thand 7thjudicial circuits. An ordained minister, she is active in the children’s church at Grace Cathedral Ministries in Piedmont.

When Helen talks about her work in child advocacy, she reaches back to her own childhood. “From the time I was a little girl,” she says, “if you’re the bully, I’m gonna have a problem with you.” She said she was reminded of that in late 2016, when then-second grader Michaela came home from school and said that a boy in class told her and another little black girl that, now that Trump was president, they would “have to go back to Africa.” She pauses for a moment to let that sink in, adding, “I want to fight for District 35 the way I would fight for my own child in that situation.”

Helen is quick to talk about schools. She is especially angered by the unintended consequences of state legislation in 2006 that lowered property tax rates in return for a higher sales tax. The impact of the law has been uneven across the state, including District 35, which straddles Greenville and Spartanburg counties and includes two school districts. “Why is it that one school district has funding for computers and the other one doesn’t? Why can’t we find a way to make funding more equitable across all districts?” she asks. Her call to Bill Chumley on this issue, which she made in January 2017, remains unanswered a year-and-a-half later.

Turning to the economy, Helen related a story that opened her eyes to the people who “fall between the cracks.” She walked into a restroom at a local QT and came upon a young woman getting ready for work. When she asked about her situation, the woman admitted that she was forced to live in her car because she couldn’t afford an apartment and tuition for SC-Upstate with the money she made at her $9/hour job. “There should not be homeless people in this district,” Helen says, with a hint of anger in her voice. “The words ‘working’ and ‘poor’ should not be in the same sentence!”

Much of Helen’s platform focuses on “must do” issues like infrastructure improvements, but she gets truly animated when she talks about an increased minimum wage, which would directly help people like the woman in the QT. Warming to the topic, she supports other initiatives, like low-interest college loans and incentives to local entrepreneurs, that would benefit the economies of small communities like hers. She cites her own situation with student loans – in which she owes more than twice what she borrowed – as typical of the challenge many people just entering the workforce face. She mentions programs in other states that offer development grants and training to encourage would-be small business owners.

As Election Day nears, Helen is philosophical about her chances. She knows how difficult it can be to dislodge an incumbent, especially as a Democrat in a conservative district, but she continues her outreach to potential voters, personally writing postcards inviting inactive voters to attend a town hall. She admits that while “there are days when I just don’t want to be an adult,” she has taken herself out of her comfort zone to go door to door to canvass her district, and even sees the humor in occasionally having a door closed in her face. As she talks about campaigning, she comes full-circle to her children, and relates a recent conversation she had with Michaela, who asked what she’ll do if she doesn’t win in November. “No doubt about that,” Helen says softly. “Mommy will keep on fighting.”