Home » Blog » This or this » In a national disaster, leadership or laugh lines? 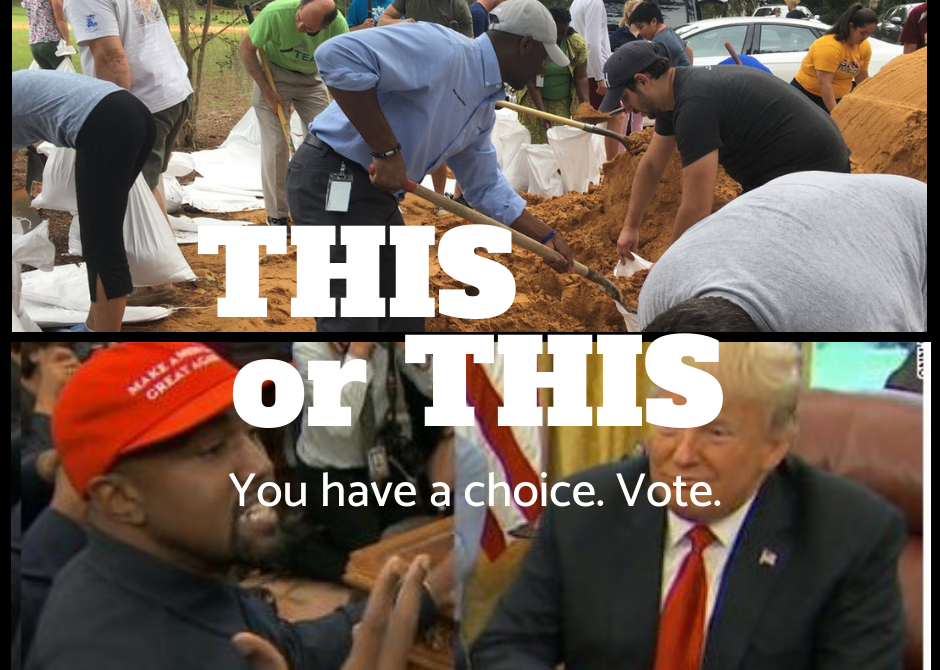 In a national disaster, leadership or laugh lines?

“This or This?” Is a series of posts on policy issues to draw the clear differences between the Republican administration and Democrats. This entry is on leadership and common values of caring for and supporting Americans in time of national disasters.

Issue: On October 10, a category 4 hurricane named Michael slammed into Florida with winds just 1 mph short of a category 5. Over the next 48 hours it roared through Georgia, cut a swath through the Carolinas and then rained destruction and death upon Virginia. It was the most dangerous storm to hit the mainland since Andrew in 1992. And the third most severe of all time.

Elected officials cannot control the weather. But they certainly do control their own actions.

As Florida braced for the storm, President Trump attacked the Democratic mayor of Tallahassee, who is also running for governor. He baselessly charged that the city was “tremendously corrupt” and had “tremendous crime” and that if Andrew Gillum is elected “Florida will become another Venezuela.” Gillum fought back by rolling up his sleeves and helping first responders prepare sandbags, pictured, and utility crews clear roads after the storm. While the storm was barreling through vulnerable coastal towns, Trump  held a rally in Erie, PA, in which he attacked Democrats as too unhinged to govern. And on Thursday with the Carolinas and Virginia now bearing the brunt of the storm, Trump invited Kanye West to lunch in the White House. Kanye’s inane soliloquy, including the use of the term “m—-r f—–r” in the Oval Office in front of the national press, was, according to staff in the White House, “an embarrassment.”

All these things were going on while Americans were fighting to save their homes, their lives, their communities. Trump’s occasional tweets about “stay safe” and “it’s all handled” exacerbate the situation.

And it was worse afterwards, according to The Daily Beast reporter in Panama City, filing on Oct. 13:

Barbara Sanders stood outside her daughter’s unit where she had come to stay during the hurricane.

Sanders said not a single relief agency had come by to check on them. Only the police had come and it was to tell everyone to leave. “They told us there’s nothing they can do and it’s gonna take a long time to rebuild,” Sanders said.

Just then a pick-up truck arrived with water. It was the first help this neighborhood had received and it turned out to be two brothers, Chris and Brendon Hill, from Louisiana who had decided to come and help residents here.

“The American people are helping us,” Gisbert said. “FEMA will eventually come into the game and get the accolades in six months.”

Federal, state, and local officials were hunkered down at the Emergency Operations Center set up at Gulf Coast State College in Lynne Haven, trying to get urgently needed food and water to residents. The EOC denied The Daily Beast’s request to speak with the EOC chief, Mark Bowen, and city officials. Spokesperson Catie Feenie said the focus was on “coordinating some patrols who are in life-saving mode” for the 60,000 residents that had not evacuated before the hurricane, like Goolspy and Sanders.

“We’re telling everybody to save [food and water] because it will be days before we’re ready to do that,” Feenie said.

At a press conference in Panama City on Saturday evening, Gov. Scott stressed the same point.

“Everybody just needs to help each other right now,” he said.

The toll: Estimates are that 16 people have died; thousands are missing. There may be $4.5 billion in losses, not including an entire US military base. Some 20 F-22 fighter jets may be among the casualties. At a cost of $340 million each, that’s about $7 billion. But more importantly is the destruction of communities, the lack of food and water in the hardest hit locations, and shortage of medical care (does that sound familiar, Puerto Rico?). In Florida, four hospitals have closed along with 13 nursing homes and 14 assisted living centers. Following the storm, Florida residents said there was no visible response from the federal government. One woman, a diabetic who, after losing her home, is forced to live in her car where she injects herself with insulin, asked “when is anyone coming to do something?”

Bottom Line: No, politicians cannot stop storms or control the weather. But they can exercise leadership to ensure the federal government is doing all it can to support state and local efforts. They can put people ahead of campaigns and do their jobs of monitoring the federal response to ensure all the resources required are on the ground and whatever needs develop — food, medicine, transportion — are acted upon as quickly as possible.

What are Democrats for? We are for people, for helping our communities, for rolling up our sleeves to pitch in during disasters that affect our people. We are for leadership, for modeling how we want others to act in similar situations. And holding our governmental agencies accountable: Rewarding the great work they often do, but reviewing and demanding improvement when efforts fall short.

We are not for bullying, getting laugh lines at others’ expense, lying to gain a political advantage. And certainly not for fiddling around while American citizens fight for their lives.

The choice is yours. You make it when you vote on November 6.