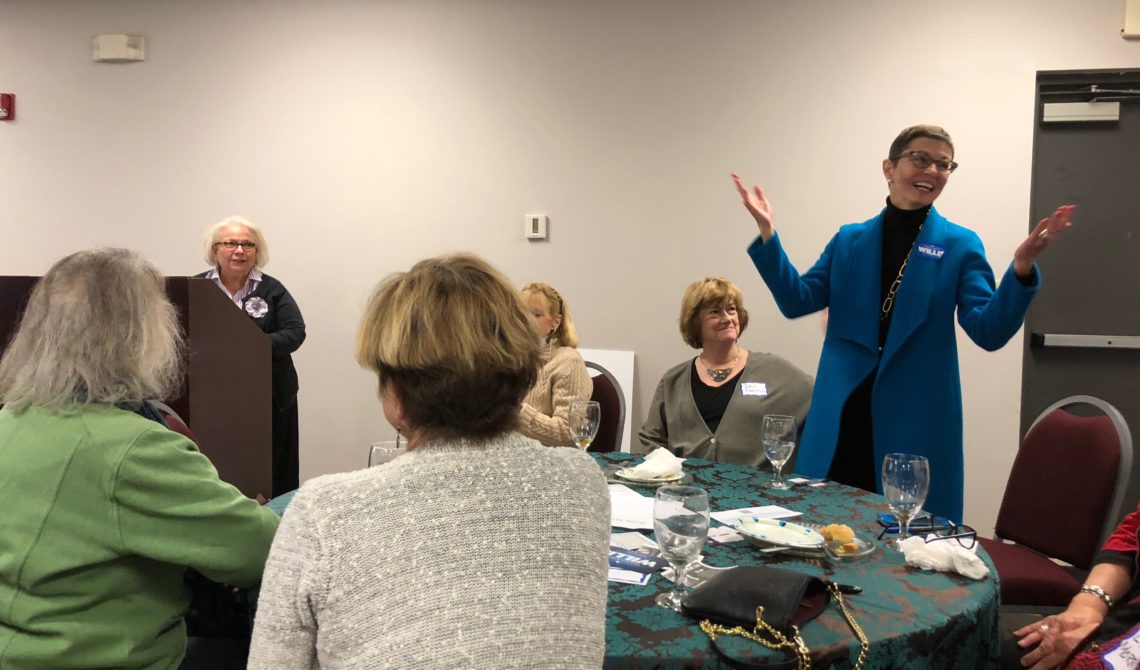 Marguerite Willis addressed the April meeting of the Democratic Women of Greenville County, wrapping her gubernatorial goals in humor and storytelling.

The packed room of 80 Democratic Women was wracked with laughter as Marguerite Willis, candidate for governor, held up a poster-sized drawing of herself depicted as Wonder Woman (or a WWE warrior, depending on your perspective). Drawn by Robert Ariail, editorial cartoonist for The State, the poster served as a backdrop to a dust-up between Willis and The Greenville News over comments she made about President Donald Trump. 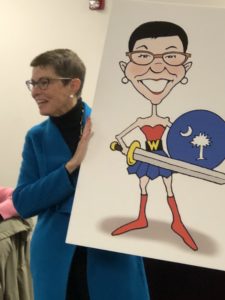 Ask about her opinion of Trump during a video-taped interview, Willis recalls saying “I thought he was a racist and a sexist and I didn’t think we needed a racist or a sexist representing our country. I stand by that statement.” The “snippet” went viral and Willis got some heat. Armed with her very own “action figure”, Willis seems ready to give some back. “They want the campaign to be classy,” she says. “I say this to you and I’d say it to Donald Trump to his face. I will be a lady on the campaign trail as soon as you are a gentlemen.”

Willis then ticked off several ways Trump could prove himself to be a gentlemen. Agree not to drill for oil off the South Carolina coast, lift the tariffs on washing machines and solar panels that hurt companies like Samsung, budget funds necessary to deepen the Port of Charleston, stop threatening a trade war with China, and “quit saying that white supremacists are good people.”

Although she touched on several issues during this riff, Willis focused her talk on gender equality. She noted that South Carolina had been on the wrong side of women’s history in three instances: Voting against the Constitutional Amendment that gave women the right to vote, voting against the failed Constitutional amendment that would have codified women’s “equal rights”, and the fact that we are one of only a handful of states with no equal pay act.

“Why are women so undervalued?” she asked. “If women were just paid equally with men it would be a huge revenue enhancer for this state, totaling about $5 billion. It’s way past time for this legislation.”

Women, Willis noted, have the power to change things. “We are 52 percent of the state, we control 51 percent of the wealth. All you’ve got to do is vote… We can do this.”

Willis, an attorney with a Columbia law firm, knows what it is to be undervalued. She regaled the audience with a bittersweet story of her first marriage. Her ex-husband cheated on her, installed a girlfriend in their home when she was gone on business during the week, and stole her money. “After I got over being mad, sad, broken and heartsick. I realized that I was one of the lucky ones. Because I had a good job and I could leave him. I was not financially stuck there,” she recalled. “Then it became my mission to talk to women about financial independence. You need to have something that is your own.”

Bringing her message back to politics, she challenged the audience to change the narrative. “We have allowed ourselves to be undervalued,” she said. “It’s time to show that we need diversity, new leadership, new ideas, and passion.”

Diversity was a theme of her talk. In the newsiest element, she announced the selection of her running mate: Sen. John Scott, an African-American senator representing Richland County. “The two of us, standing together, we look like South Carolina,” she stated.

Willis views herself as a “problem solver”, who is not afraid to take on big problems that need quick and effective solutions.

“Our problems are not easy ones,” she concluded. “We need someone who can tackle tough problems – education., healthcare, infrastructure, safety,  lack of teachers. I’ll get up every day and work for this state and do the best I can to solve what I can as fast as I can.

“And I will never, ever kick the can down the road.”