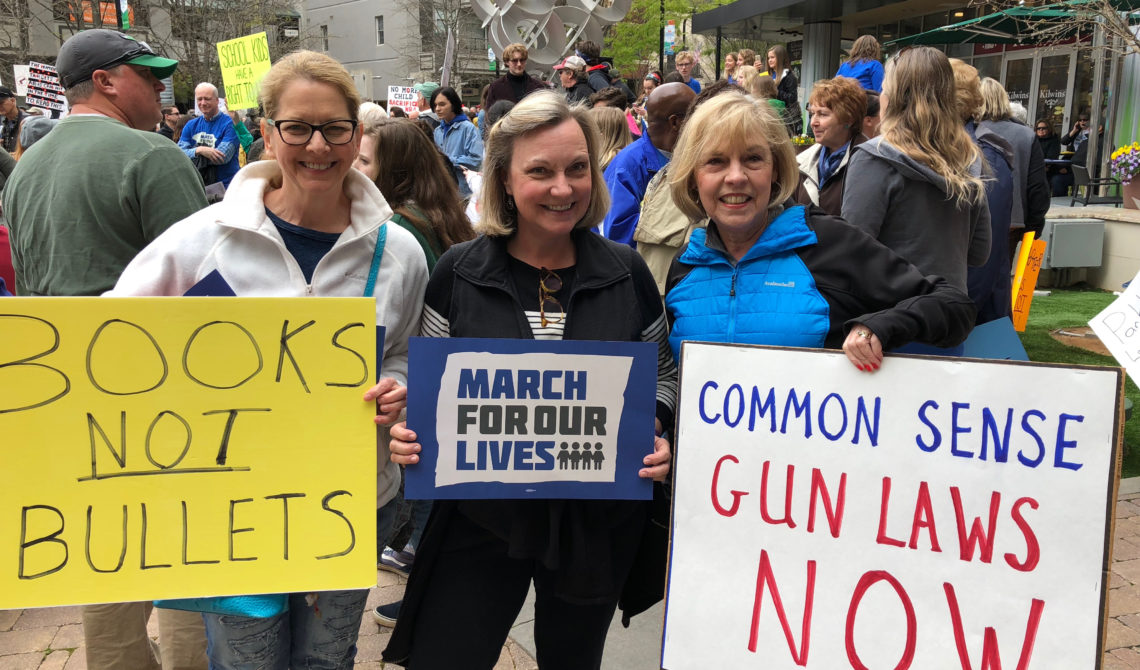 Next steps for sensible gun laws

Activated by an army of high school students, millions of gun violence activists filled the streets of cities and towns across the country on March 24. That was exciting, but it was just the beginning. So what do we do now?

I am an ordinary middle-class working parent. In 2012, when the elementary school shooting happened at Sandy Hook, my babies were still literally babies – just 7 months and 3 years old at that time.

I still remember so clearly the pit of pure dread in my stomach, learning the horrifying details of the attack. Then I watched with discouragement and disbelief as no meaningful federal legislative action followed.

Now a half-decade later, I have two school-aged kids in my house along with the uniquely American anxiety over regular mass shootings. Beyond that, the broader gun violence epidemic in this country weighs heavily on my heart. After the awful Parkland shooting, our family joined with more than 2,000 other Greenville area folks in the recent March for our Lives. It was an incredible, peaceful, galvanizing event. Something really seems to be changing, and young people, along with other faithful activists, are leading us forward.

So, what comes next?

For starters, here’s a summary of recent gun legislation proposed in the state legislature. While several different bills have been introduced and, in some cases, even voted on by one of the two chambers, none of them have passed both. Because of this, it is very likely that time will run out on the 2018 legislative session (slated to end mid-May) before anything gun-related can pass.

Based on the two-year legislative cycle in SC and these bills’ histories, this means that the 2018 gun-related bills would expire, and state lawmakers would be starting from scratch when they reconvene again in early 2019. That would leave bills like permitless carry, the “Second Amendment Protection Act”, and even positive ones, like closing the “Charleston loophole” out in the cold, according to Jean Fontaine.

Fontaine is a leader of the Upstate chapter of Moms Demand Action, which has been a powerful advocate fighting for sensible gun control and other efforts to stem gun violence.  Moms Demand Action is a national organization that focuses on survivor support, gun sense/safety with a focus on children, and legislative action. The Upstate chapter spent the first months of 2018 focused on state legislation, but with that session wrapping up soon, they are now shifting their focus to federal legislation.

Besides connecting on Facebook with the local chapter (Moms Demand Action – Upstate SC), Fontaine urges that we should be alert to several items coming up in Congress and actions we can take now.

Their parent organization –  Moms Demand Action for Gun Sense in America – was founded literally the day after the Sandy Hook shooting. Quite quickly, the grassroots organization spread and soon there were chapters in all 50 states. Members have partnered for positive change at the local, state, and national level ever since, notching dozens of victories over their five-year history. Much more than moms only, the group is for anyone who wants to make a real impact on sensible gun reform.

Fontaine shared, “in the words of our [Moms Demand Action] founder, Shannon Watts, ‘This is a marathon, not a sprint’.” Let’s all take small steps starting today, to advance the cause of common sense gun safety reform at every level. Join me!