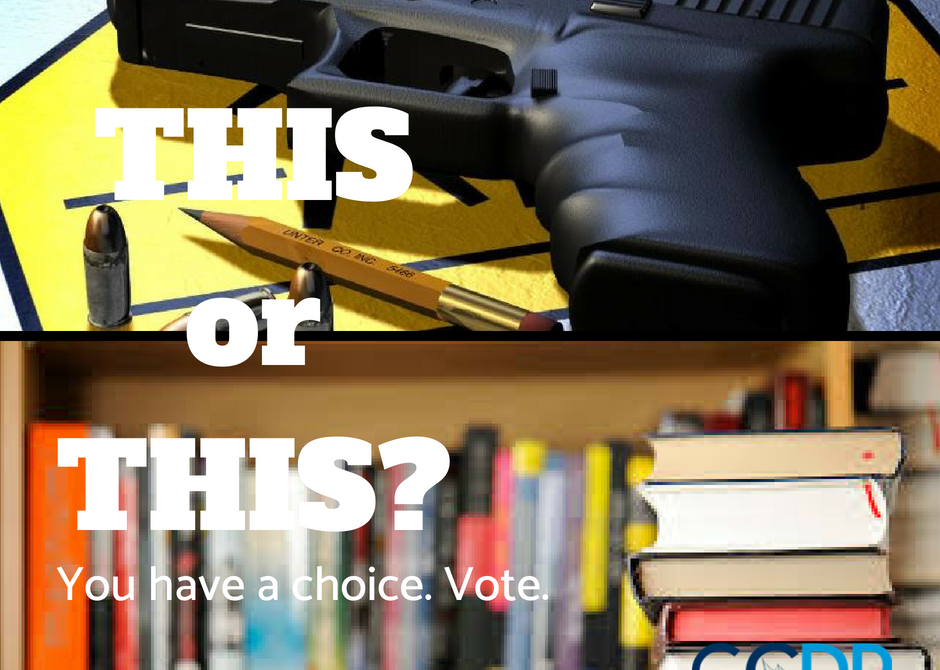 Should education funding be used to arm teachers?

“This or This?” is a series of posts on policy issues to draw the clear differences between the Republican administration and Democrats. This entry focuses on the intersection between gun control and education, particularly whether federal education funds should be used to arm teachers instead of educate kids.

The question of federal funding for education under Title IV grants was thrown into a whirling vortex in the early fall thanks to Secretary of Education Betsy DeVos. She announced that these block grants, which had previously been earmarked for education and educational enrichment programs, could be used to purchase guys to arm teachers.  After education leaders and congressional Democrats demanded clarity on the issue, DeVos kicked the issue back to the states, saying it was up to each state to decide whether they would use the funding for guns. Congressional Democrats sought to forbid the use of federal ed money to arm school personnel in the 2019 budget resolution.  The 2019 spending resolution the GOP House majority passed at the end of September 2018, does not include restrictions on states using federal money to purchase guns to arm school personnel.

Schools have been a frequent target for mass shootings. Through October, there have been 65 shootings in schools this year, including Parkland, FL., where 17 students were killed and another 17 injured last spring. In a polarized political environment, solutions have been elusive. After Parkland, the idea of arming teachers gained significant traction, despite being opposed by teachers, teacher unions, and educational organizations.

A major factor appears to be the belief that more people with guns can more effectively stop an intruder. This is a myth. A number of studies have indicated just the opposite.  A frequent source cited in support of the more-guns-are-good theory comes from a study conducted by criminologists at Florida State University in 1992. The survey is often generalized to support the idea that “millions of US gun owners successfully use their guns to defend themselves and their families.”

An analysis by Politico cited this survey and its conclusions as “despite being thoroughly repudiated at the time, persists in influencing personal safety decisions and public policy throughout the United States.” The researchers, according to Politico, “surveyed 5,000 individuals, asking them if they had used a firearm in self-defense in the past year and, if so, for what reason and to what effect. Sixty-six incidences of defensive gun use were reported from the sample. The researchers then extrapolated their findings to the entire U.S. population, resulting in an estimate of between 1 million and 2.5 million defensive gun uses per year.”

Since then several research studies have debunked the myth. There’s also significant evidence to support the fact that innocent bystanders are often the victims when gun owners, not trained in crisis situations and handling themselves in active shooter situations get involved.

The pros and cons

Supporters of arming teachers often point to Texas, a state where teachers are already permitted to carry guns in schools. Still only one in seven school districts in the state have decided to arm teachers. In Santa Fe High School in May of this year, 10 people were killed and 10 others were wounded in a school with two armed police guards, a schedule of active shooter drills, and a district-wide plan. Among the dead was one of the school’s assigned police officers.

Most Americans oppose arming teachers: A CBS news poll found 57 percent were strongly opposed to the idea, a poll of teachers taken by Teach Plus found 80 percent were opposed, and a National Education Association poll found 82 percent of teachers would refuse to carry a gun to school.

The debate if fueled by several unanswered questions such as the criteria for open carry in schools, how weapons would be stored and protected, how teachers would be trained, what would teacher liability be, would teachers be able to pull the trigger if a student was the shooter, and so much more.

The Choice for South Carolina

We have the worst educational outcomes in the country, according to US News and World Report’s 2017 state rankings. The state is not currently achieving minimally adequate education in all of its school districts. And next year, federal grant money will be 2.3 percent less than this year. Teacher pay has been a major issue in the midterm elections, as well as the loss of a tax deduction in the 2018 Tax Cuts. Teachers in SC do not have enough financial support to provide books, paper, pencils, and other educational materials to their students. Almost every teacher has to spend some of their own money to provide tools for their students.

Into this financial climate will the state consider using federal block grants to arm teachers with guns, rather than prepare students with a strong education?

That remains an open question as South Carolinians go to vote in this election cycle, but Democrats support a fully funded educational system, increases in teacher salary and ensuring that every student have the same educational opportunity.