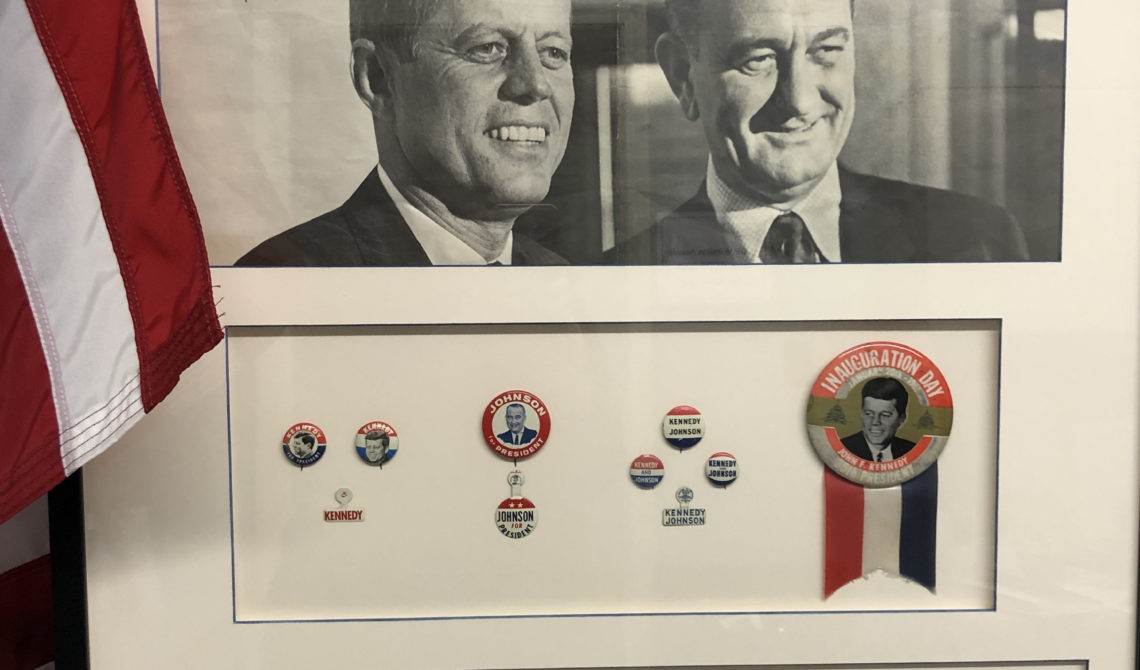 Allen Grumbine recently donated a shadowbox of 1960 campaign memorabilia on JFK and LBJ to the GCDP. It is displayed in our office. We called Allen to find out more. Here’s what he told us.

Ten-year-old Allen Grumbine was completing a school assignment in February of 1960 when he wrote to the Lyndon Johnson and John F. Kennedy campaigns for some campaign literature.

He ticks off the Democratic candidates for president in 1960 – a roll call of giants of political history: LBJ, JFK, Stu Symington, Hubert Humphrey, Stuart Udall.

The assignment was to write to a campaign for literature and to deliver a report in front of the class about what you found out about the candidate.

Allen wrote to both JFK and LBJ, receiving an autographed photo of the future president in his packet. It would not be the last bit of political memorabilia he would collect.

Although that was homework, Allen had already had a pretty good grounding in politics at home. “My parents would talk about politics and current events at the dinner table,” Allen remembers. They “thought a lot about Kennedy as a senator” he recalls, and his grandmother “hated Nixon. She thought he was a crook.”

HIs Democratic parents liked Kennedy, but they thought his religion – Catholic – would keep him from being elected.

Growing up, Allen had a front-row seat to history that included living in Montgomery, AL, during the Rev. Martin Luther King’s rise to prominence, working for the Johnson campaign in 1964, and being in law school (Vanderbilt) during the Nixon impeachment. “It was an interesting time to come through.”

Forty years later, Allen, now a Greenville resident and retired attorney and managing partner of Womble Carlysle, remembers that fifth grade teacher (“she was a great teacher”) with a wistful sense of loss. “We haven’t had that in a long time,” he says, “and that has consequences.”

“I grew up with a decent understanding of the Constitution and how it worked,” he notes, lamenting that we don’t have those same levels of knowledge today. Looking at our fractured politics, he suggests: “We may be better off that this has happened and has been called out.”

Recently, Allen was cleaning out his house and came across some of the political remembrances of his youth. Some things he could not part with – like the autographed picture of JFK. But he wanted the JFK-LBJ shadowbox to find a real home.

“Maybe our day will come again,” he says. “I wanted it to be somewhere it would be appreciated.”