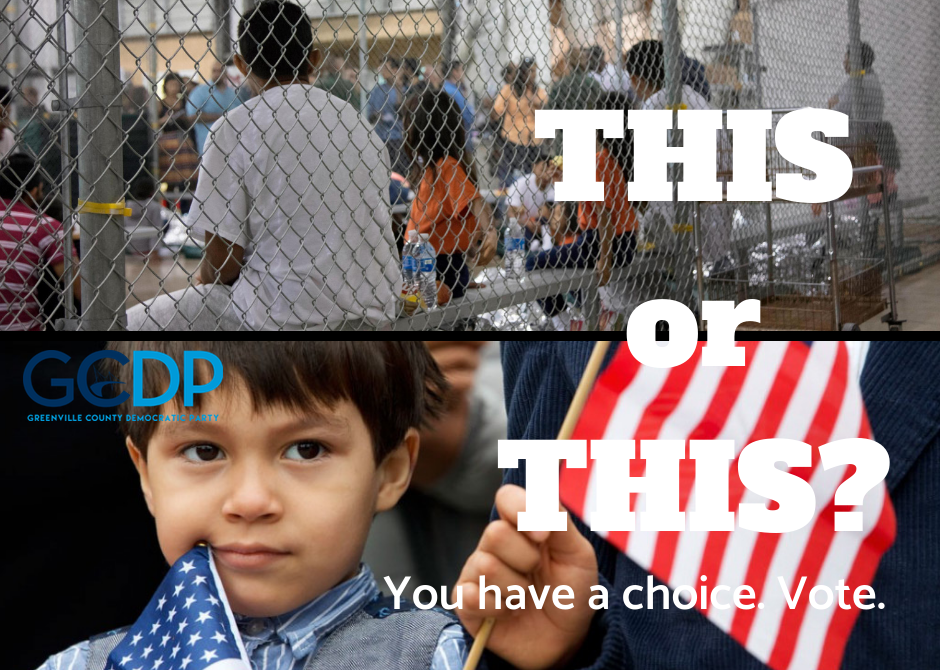 “This or This?” Is a series of posts on policy issues to draw the clear differences between the Republican administration and Democrats. This entry demonstrates that recent policies restricting immigration and separating families as a deterrent negatively affect the US economy while having no impact on crime and violence in the country. It also flies in the face of a bedrock principle. We have restricted immigration and turned away asylum seekers before, and always those have proven to be dark days in US History.

Issue: This past summer, the Trump Administration went beyond its vow to build a wall on our southern borderand enacted two new immigration policies. First, iteliminated U.S. protections for immigrants seeking asylum from gang and domestic violence. Second, it implemented a zero-tolerance policy, forcing immigration agents to immediately turn border immigrants away or put them behind bars to face criminal prosecution – regardless of their status, including those who were seeking asylum.

In addition to the harsh policies that effect asylum seekers at our southern border, Trump introduced an unlawful travel ban on seven majority Muslim countries shortly after taking office. It was a debacle and a federal judge placed a temporary delay on the original executive order. But the administration rewrote the policy multiple times until a diluted version was finally upheld by the U.S. Supreme Court in December 2017.

All together and as expected, painting immigrants broadly as criminals and freeloaders, this president is taking unprecedented steps to restrict pathways to migration and asylum for those seeking safe harbor and pursuing a better life in the U.S. Democrats consider the administrations action immoral, costly, wasteful, and anti-American.

Zero-tolerance required immigration agents to forcibly separate children, including toddlers, from their parents. In July, PolitiFactconfirmed that from April 6 through July 17 nearly 2,600 children were taken from their parentsand confined in makeshift jails built and managed by private contractors.

The federal government acted so quickly to implement the new policy that standards for oversight and childcare were unclear or insufficient. During this time, requests for access to the detention centers by child advocates, concerned doctors, psychologists, and even public officials were continually denied. It was soon discovered that many children were being held in cages, imprisoned in buildings without windows, and left without appropriate attention to medical needs. It is reported that at least one toddler died due to a prolonged illness that, if treated properly and on time, was preventable.

It took extended public pressure and a federal court injunction to stop family separation and force the administration to reunite children with parents and detain families together. A late September court update is 87 of 103 children under the age of five, and 2,209 children ages five and older, have been reunified with a parent or sponsor. As recently as Sept. 30, the Health and Human Services Department told Senate staffers that case managers could not find 1,488 childrenafter they made follow-up calls to check on their safety from April through June. That number represents about 13 percent of all unaccompanied children the administration moved out of shelters and foster homes during that time.

Democrats have been fighting these policies from day one, consistently demanding that the government account for every child and ensure that it has a method to reunify their families. But with no real checks and balances, their efforts to stop these draconian methods have been little more than rhetorical outrage.

More than 117 bills have been introduced by Democrats in Congress addressingimmigration issues, many of them crises created by new, provocative policies. One, the Keep Families Together Act, introduced by Rep. Jerrold Nadler of NY, has 194 co-sponsors. Govtrack.us gives it a 12 percent chance of becoming law.

Another calling for the establishment of an interagency Office for Locating and Reuniting Children with Parents was introduced in the Senate by Sen. Jeff Merkley, Democrat from Oregon. Introduced in June, this has not even been assigned to a committee.

Apparently, severe and harsh policies cost more to implement. Less than four years ago, in 2014, it cost $298 per person per night to detain families together. Trump’s child separation policy cost the U.S. taxpayer $775per child per night – on top of the cost for detaining parents separately.

The federal government must also rely on private contractors who appear to be benefiting from family separation and kids crossing the border. Since 2017, the Department of Health and Human Services (HHS) paid contractors $1.2 billion to facilitate immigrant child detention and childcare. One, in particular, Southwest Key Programs, Inc., has received $569 million in the just the last two fiscal years.

According to the Administration for Children and Families (ACF), an HHS agency, the Trump administration will pay $943 million or more in 2018 for the detention and care of immigrant children.That rivals the government’s total spending forall goods and servicesin fiscal year 2017 ($958 million).

While the Trump administration is not claiming that zero-toleranceis counterterrorism, its stance is that harsh and severe action is necessary to protect the country from violent crime. But the facts do not support the administration’s actions. Recent studies cited in a March New York Timesarticle show that the immigrant population in the U.S. has soared since 1980 while the overall violent crime rate has significantly decreased.So, while immigration is rising coast to coast, crime is falling.

John Cohen served the U.S. Department of Homeland Security as Undersecretary for Intelligence and Analysis and Counterterrorism for both Republican and Democratic presidents. He is a Rutgers University professor and 32-year law enforcement and counterterrorism veteran. In his commentary for The Hillearlier this year he says that, regardless of citizenship status, immigrants are less likely to engage in violent criminal activity than those born and raised in the U.S. He states that “embellishing the threat posed by illegal immigrants may gratify the president’s political base, it also undermines and erodes the very operational relationships that are vital to protecting our communities from violence.”

Illegal immigration at our southern border is dangerous, difficult and unreliable, making it an unlikely route for determined terrorists wanting to enter the country. A U.S. State Department Country Report on Terrorism, in fact, states “There are no known international terrorist organizations operating in Mexico… and no credible information that any member of a terrorist group has traveled through Mexico to gain access to the United States.”

A recent U.S. Census report states that for the first time in our country’s history, people over 65 will outnumber children by 2035, and a shrinking workforce and aging society means we will eventually have fewer people to fill jobs. According to a Pew Research Center report, Without continued growth through immigration, the U.S. is facing a shortage of a 166 million workers.  That will exacerbate the crisis funding Medicare and Social Security for all Americans. Although immigrants pay into these systems, they cannot draw out.

Analysis of state and local tax data by the Institute on Taxation and Economic Policy (ITEP) in 2016 shows undocumented immigrants contributed approximately $11.6 billion to the economy annually, including nearly $7 billion in sales and excise taxes and $3.6 billion in property taxes.

Regardless of the evidence that immigrants bring value to the U.S., Republicans at all levels of government continue to build an image that immigration results in higher crime ratesand a drain on our economy. Even Deferred Action for Childhood Arrival (DACA) recipients have faced significant challenges in light of actions by this administration.

The DACA programestablished through and an executive order by President Obama in 2012 gave more than 800,000 young people brought here illegally as children an opportunity to live and work in the U.S. legally. In turn, these Dreamers(named for prior legislation that offered a path to citizenship but failed in Congress) pursued education in nursing, education, social work, and cosmetology so that they could work and pay their way.

Today, however, Dreamers once again face an uncertain future because this president, with his party’s support, ended DACA last year. In fact, 10 state attorney generalsled by Alan Wilson of South Carolina, threatened to sue the administration if it was renewed.

Even so, South Carolina State Reps. Neal Collins, R-Easley, and Will Wheeler, D-Bishopville, have tried to pass legislation that would enable DACA recipients to gain better opportunities for education and occupational licenses in our state – yet, to no avail.

A national study by the University of Southern California and the Center for Progress, estimates DACA recipients and the DACA-eligible population had a $262.7 million impact on South Carolina’s economy annually.

According to the Cato Institute, efforts to remove DACA students would cost the United States an estimated $60 billionand result in an estimated $280 billion in additional economic losses over the next decade.

This administration’s immigration policies are immoral, unnecessary, and costly – and the consistent and concerted attack on migrant individuals and families is clearly out of sync with our American values.

Nowhere is the choice between Republicans and Democrats more clearly defined.

The vast majority of Republicans have signed onto these anti-immigration policies, stoking fear and hatred throughout the country.

In contrast Democrats stand for something else. We embrace immigration as a core American value and are confident our system can provide both humanitarian relief and protection for its citizens at the same time. Democrats are not for unfettered immigration, we are not supportive of unregulated borders. And we are not, as the president calls us, “the party of crime.” Analyzing crime statistics in Texas, the state with the second-largest immigrant population in the country, The Cato Institute, a libertarian think tank, found legal immigrants are 86 percent less likely to commit violent crime than a natural-born American. Illegal immigrants were 50 percent less likely.

We still believe in the Statue of Liberty’s promise — that America is a beacon of hope. Our greatest leaders have demonstrated we are at our best when we give a hand to those in need and then give them the support they need to succeed independently – and a chance to become Americans.

The choice is yours. You make it when you vote November 6.