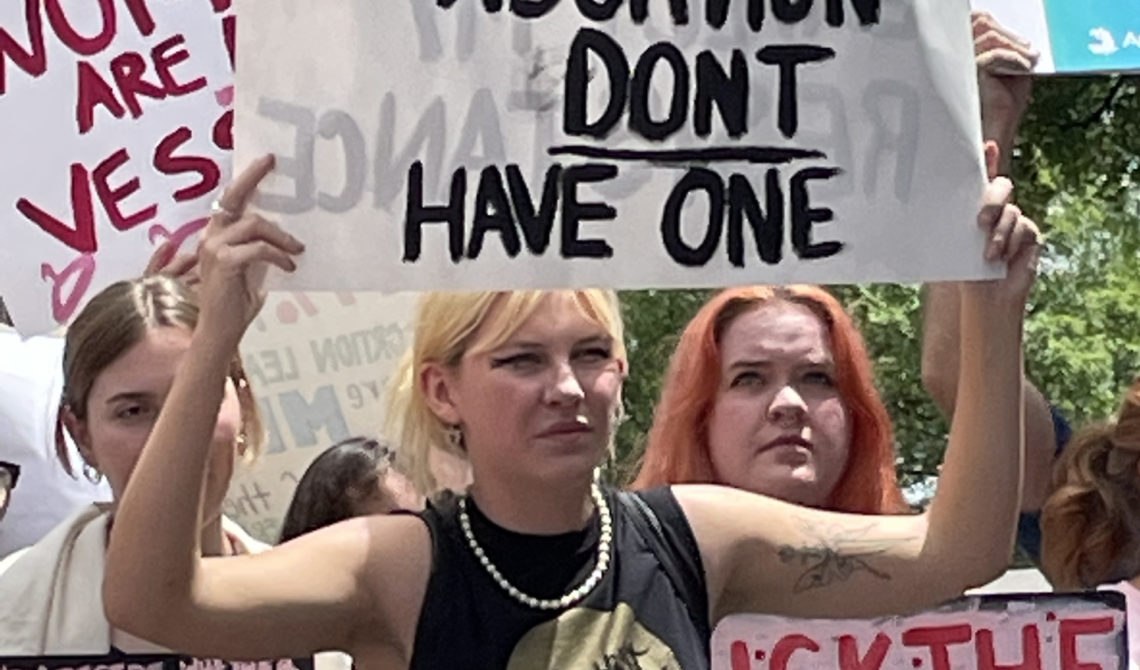 Women’s Rights: The Fight Isn’t Over

The Supreme Court has set women back 50 years in many ways. But there are still options, still fights to take on, and battles to win.

Currently, the six-week abortion ban, known as the “Heartbeat Bill” is in effect. But the Legislature is close to taking that farther with a total ban and no-excuse bill in the House, and a ban with a life-of-the-mother exception and a felony with a 25-year prison sentence in the Senate.

The Senate bill has been referred to the Medical Affairs committee. There will probably be another opportunity to provide testimony and to appear in person to rally and show support for exceptions for rape and incest.

Vicki Ringer, political director of Planned Parenthood South Atlantic in South Carolina, says this is the time to ramp up our activism. She tweeted: “Keep calling legislators. Every. Single. Day” and linked to a tweet thread from Lynn Teague, explaining to the state’s politicians “why WE are upset.”

Vicki also encourages everyone to write letters to the editor, op-eds, add comments to stories where permitted, contribute to local blog and non-traditional news sources (more to come on these). If you need some help getting started, there are some good talking points in this article from the LWV (the hearing is outdated now, but the talking points remain valid).

Social media posts are cathartic, but rarely impactful. We have to get up close and personal to make a difference to legislators.

Although South Carolina and the Southern states have pretty much barred the door on abortion, there are still 24 states in the country that stand up for women’s reproductive rights. Some of them, however, are swing states.

DefendChoice.org is a project of the Democratic National Committee and other partner organizations to reach voters in swing states on behalf of Democratic candidates, and focusing on the issue of choice and women’s healthcare. You can pick a state you want to call for, and sign up to do phone banking, text banking or Zoom banking.  It is critical that we hold the line in these states not only so women from banned states have somewhere to go other than their local back alley, but also as a bulwark against a nationwide abortion ban.

That legislation is clearly on the minds of GOP legislators in Congress, even as Democrats try to codify abortion. The House narrowly passed a nationwide abortion rights bill on July 15, but it appears to have little chance of gaining the 60 votes necessary in the Senate. Although it may seem unlikely to achieve much, write to Sens Lindsay Graham and Tim Scott anyway!

The States’ Project calls itself a “community of changemakers” and “a movement”. It’s focus is state-level elected officials. This is where the GOP has focused its attention for decades and how they have succeeded in achieving minority rule across much of the country. The States’ Project focuses on starting to refocus our attention on statehouses. They are primarily trying to put money behind the best candidates in the most vulnerable states. They do this through a giving circle model. You can start a giving circle of your own or find one to join.

Although raising money and donating to candidates may not seem so hands on, it is the grist for the political mill that makes a significant difference for state candidates, who frequently are underfunded.

How far are you willing to go to help women in need of an abortion? The Palmetto State Abortion Fund is one of several in the country that are finding ways to provide “essential community services to people in need.” Those services may include driving someone to an abortion, providing a safe space for a woman in need, and – of course – funding their efforts.  Their website is pretty general. Perhaps they want to be as non-specific as possible so as not to rile up the other side. But there is a volunteer form where you can sign up to help in the specific ways you feel you can.

Back to South Carolina

Maybe you heard, we’ve got an election coming up. We have candidates who need your help to get elected. From governor to county probate judge, our candidates need us. Visit our website, get to know the candidates, check out their websites, make a donation or volunteer to help. We need to do all we can to support Democrats in this election, in every election. Or, to borrow from Vicki Ringer: Every. Single. Day.