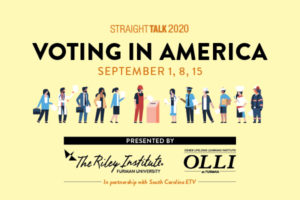 StraightTalk 2020: Voting in America is a three part series presented by the Riley Institute at Furman, in partnership with the Osher Lifelong Learning Institute (OLLI) and South Carolina ETV.

Session 1 | September 1
Lurching Forward: 244 Years of Fighting for the Right to Vote
The United States has a long history of limiting who gets to vote: at its founding, only white men who owned property were allowed to vote. Throughout our history, the battle for voting rights has been hard fought as marginalized groups have sought to have a voice. What have been the turning points throughout our voting history, and how do these experiences from the past shape voting behaviors today?

Moderated by Beryl Dakers, veteran broadcast journalist who is leading South Carolina ETV’s recognition of the 100th anniversary of the 19th Amendment

Kelly Dittmar, PhD, associate professor of political science, Rutgers University-Camden, and director of research, Center for American Women and Politics at the Eagleton Institute of Politics

Session 2 | September 8
The Dark Arts of Politics: When Politicians Choose the Voters
Gerrymandering, voter and election fraud, voter suppression, and voting rights are inevitably partisan topics. In general, the party in power wants to stay in power, and politicians are not always ethical in how they seek to achieve this goal. Moreover, 2020 is not only a presidential election year but also a census year, the outcome of which will determine people’s representation in Congress for the next decade. As we approach the upcoming election and think about future elections, what is fair in regards to redistricting, making voting accessible, and rooting out election fraud?

As we move toward the 2020 presidential election, many Americans are worried about fraud with mail-in voting, while others are fearful they will have to wait for hours to be able to vote. Some are concerned about the vulnerabilities that exist in our election infrastructure and how the system might be compromised in the upcoming election. Moreover, given Americans’ declining trust in democratic institutions, how will the losing party respond if the outcome of the election is close? What does the Constitution really say about how we choose our president?