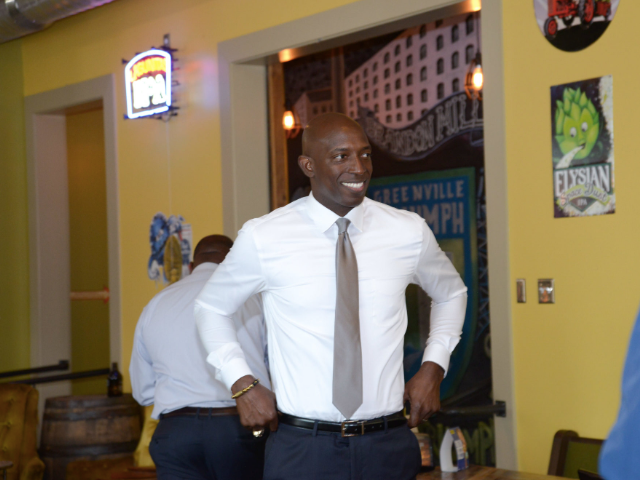 Wayne Messam, mayor of Miramar, FL, who announced his bid for the 2020 Presidency on March 28th, came through the Upstate on Monday, April 8, to meet South Carolina voters. His first stop was in Spartanburg, then he met with about 15 Greenville residents and media at the Growler Haus Brewery for a mid-day meet & greet.

Standing at an impressive 6’4″ and armed with a megawatt smile, Messam spent some time talking with individuals, then addressed the group. He told his story about being a first-generation American, and how his Jamaican-born parents came to the US in search of a better life for their children. A general contractor by trade, Messam was elected to the City Commission of Miramar in 2011. In 2015 he was elected mayor, a position he currently holds.

Messam decided to run for the nation’s highest office because he feels he has what it takes to win and collaboratively solve many of the country’s most vexing issues: climate change, infrastructure, education, and more livable wages. He believes his experience as a contractor working with many engineers to build “green” infrastructure, his experience as an elected official solving issues for the working class, and having grown up in the very diverse area of South Florida gives him an advantage over the other Democratic candidates.

He stated that Miramar has one of the fastest growing economies in the country and touts his role in helping propel the city of 150,000 forward.