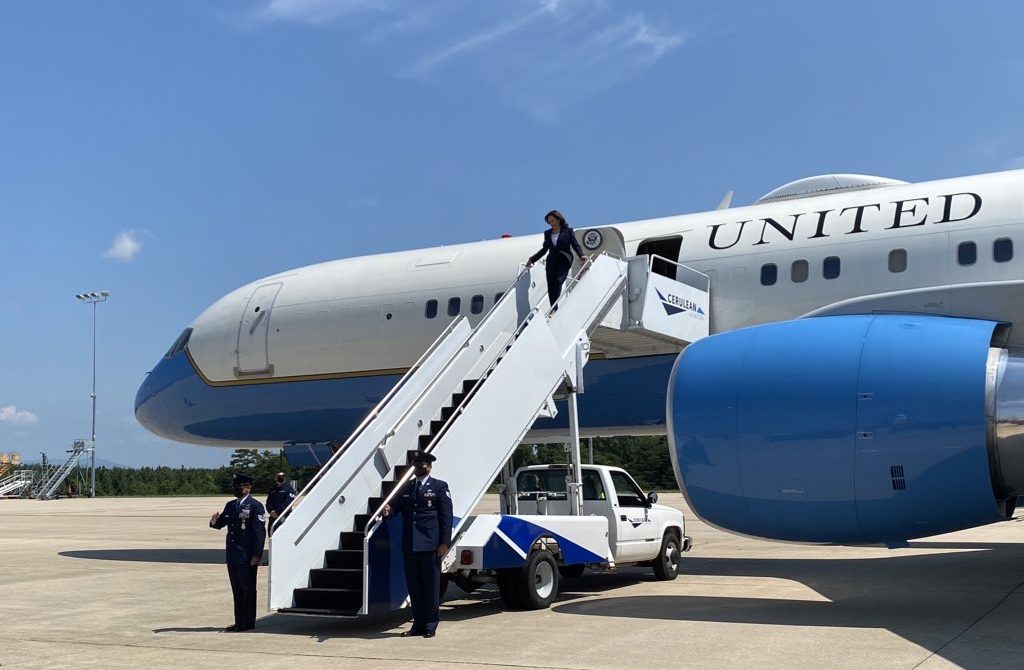 Every two weeks, the GCDP publishes an update on activities in the Upstate, Columbia and Washington that are of interest to Greenville Democrats. Each briefing leads off with an opening salvo that sets the tone. This is from the June 21 edition. Read the full newsletter | subscribe and never miss an issue.

As they say in the South: “She’s not from around here.” Yet it felt a bit like a homecoming to have Kamala – excuse me, Vice President Harris – back in Greenville.

As a candidate, then-Senator Harris visited Greenville at least twice and had a large presence here. Additionally, our own county chair, Elias “Eli” Valentin, was her state political director.

Under extremely tight security, she spoke to a group of South Carolina leaders at the Phillis Wheatley Center. They included the DNC Chair Jaime Harrison, and former governor and US Secretary of Education Richard Riley, among other elected officials, notables and friends.

Republicans welcomed the vice president with a repetitive round of “go to the border,” flooding social media with messages and memes suggesting, in the words of Rep. Nancy Mace, that “we can vaccinate our citizens just fine without you stopping by.”

Add to those disturbing statistics, the fact that surveys show almost a third of South Carolinians “definitely will not get a vaccine.” That makes South Carolina a high value target for dangerous variants. In fact, this spring, the CDC reported that 40 percent of the dangerous South African variant were concentrated in South Carolina. Just last week, it also reported that the highly transmissible and dangerous “Delta” variant, which originated in India, has been found in four cases in South Carolina. While that’s not a huge number, we are fertile ground for community spread with more than 60 percent of the population unvaccinated. The CDC says Delta is expected to become the dominant strain in the US.

In keeping with his abysmal leadership throughout the pandemic, Gov. Henry McMaster has banned vaccine passports in the state, making it all but impossible for businesses, restaurants, bars, entertainment venues, etc., to protect employees, customers, or clients. And he and his administration have deemed it a “waste of money” to do anything to incentivize or encourage residents to get vaccinated.

But, sure, let’s go with “we can vaccinate our citizens just fine without you stopping by.”

For the rest of us – those who don’t have our heads in the sand and care about the health of our communities – thank you, Madam Vice President for visiting Greenville and pushing us to find new ways to get shots in needy arms. (For the grammatically inclined, check out this discussion of whether we should use Madam or Madame in this instance.)

As a reminder: the GCDP will help anyone who has trouble scheduling their vaccine. Just call our office at 864-232-5531 and we will have a volunteer call you back and get an appointment made. We’ll even find you a ride to the shot, if you need one.