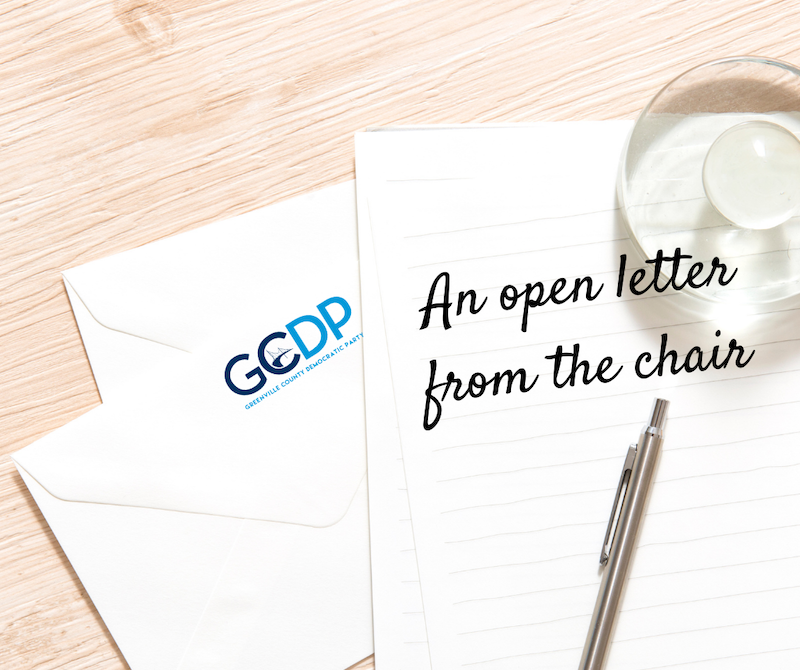 This fall, the Greenville chapter of the League of Women Voters invited candidates running in contested races for State House, State Senate, and County Council to participate in moderated forums against their opponents. Democratic candidates accepted. Every Republican declined to participate, save one County Council candidate. That debate was subsequently canceled.

Because the national LWV’s policy is not to hold ‘empty chair’ forums Greenville County voters were robbed of the opportunity to learn more about Democratic candidates trying to earn their votes or to question their current representatives on their record. It is also an unsettling example of the arrogance of Republicans in power to refuse to defend their record or answer questions even to their voters.

What we see is an air of entitlement, not a real democracy, at work.

Inaction on education has been an embarrassing failure for the state for decades. And this year, even with owning the state government and a massive education package on the table, the legislature could not get anything passed. Nothing is stopping them from passing a bill, except their refusal to prioritize our students and teachers.

Inaction on pay equity. In a state where a full one-third of households cannot meet their basic needs from month to month, the state Legislature has refused to establish a minimum wage. We are one of just five states that can’t even be bothered to care enough about our citizens to examine the balance of income and economy and establish a fair minimum wage. Who is fighting for these workers and families?

Inaction on safety and security. Our state ranks 7th in the US for murders with guns and 11th for overall gun deaths. Despite losing nine South Carolinians, slaughtered at a Bible study in Mother Emanuel AME Church in Charleston, these “leaders” have been unable even to close off the so-called “Charleston loophole” that allowed the killer to buy the gun he used despite failing a background check. But South Carolina does consider a lot of gun legislation to increase the number of firearms owned and decrease the checks and regulations required to own them.

With a record like this, it’s not hard to understand why Republican incumbents refuse to face their opponents and constituents.

What is harder to understand is why we let them get away with it and vote them back in.

Have we forgotten how a functional government operates? Are we now willing to accept dog-whistle, unsupported name-calling instead of policy discussion and debate? The fear-mongering warning that voting Democratic is a socialism path would be ridiculous if it weren’t so frightening.

Don’t tell Amanda McDougald Scott, County Council 24, a researcher and advocate for families, making childcare a priority in policies across-the-board in Greenville, which is now known as a “childcare desert,” is socialism. She is using her talents to think creatively for all of our families regardless of the political party.

Don’t tell military veterans Hao Wu, candidate for Senate 6, and Je’Varus Howard, State House 19, that they are socialists as they campaign on actually delivering improvements to our broken education system, minimum wage laws that help workers who often work two jobs to make ends meet, and policies that support the small businesses and veterans that are the backbone of our communities.

As our state – where experts have described public health policies as “ruthless” – struggles with the pandemic, don’t tell Dr. Dawn Bingham, candidate for Senate 12, and public health professional Kim Nelson, CD-4, that we’re doing the best we can. They know we can and must do better. It is something each of these talented women has dedicated their life’s work.

Our state – and significantly, our county – is changing. The last decade has brought an influx of new residents, many moving down from the north to escape brutal winters, and others moving up from Florida after an endless assault of hurricanes and attracted to the beauty Greenville possesses. These new residents want more accountability, more transparency, and – importantly – results.

More Democratic voices in state and local government will spur meaningful discussion on real policies and clarify to recalcitrant Republicans that their seats are not a birthright. They are in the hands of engaged South Carolinians, who will demand results that will pull our state up from its permanent home in the basement of rankings to be the state that the vibrant, hard-working, entrepreneurial, and diverse citizenry deserves.