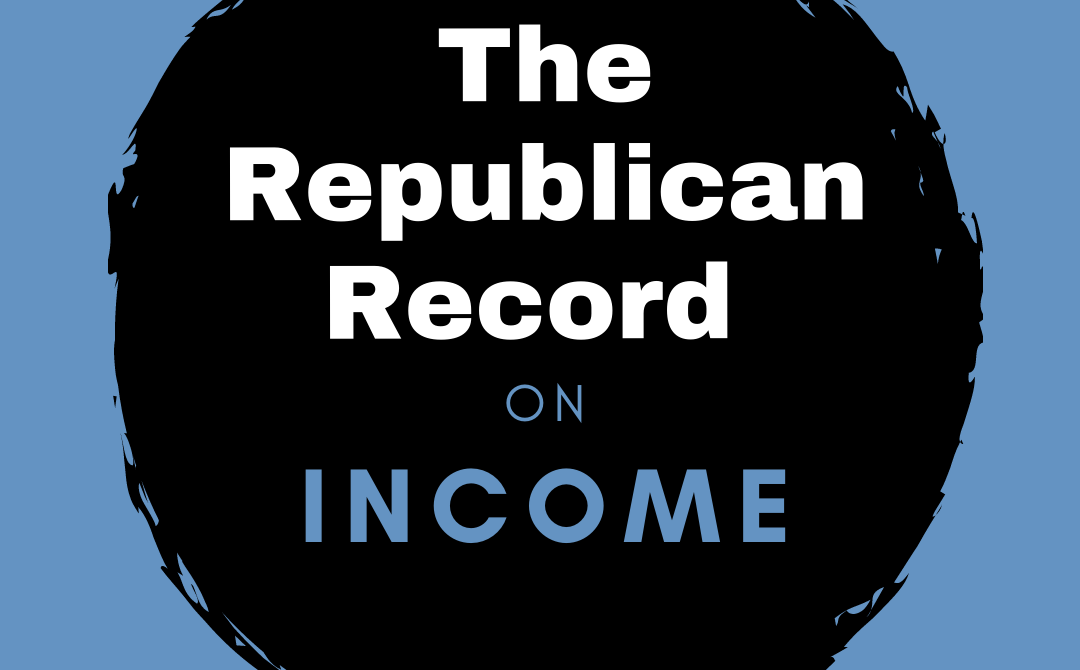 The Republican Record on Income

South Carolina’s median household income of $52,309 put it at 42nd in the nation and more than 10K below the national median. In light of the GOP’s historic control of the legislature, that ranking is essentially the Republican record on income in our state.  Is the GOP the party of fiscal conservatism or fiscal discrimination? 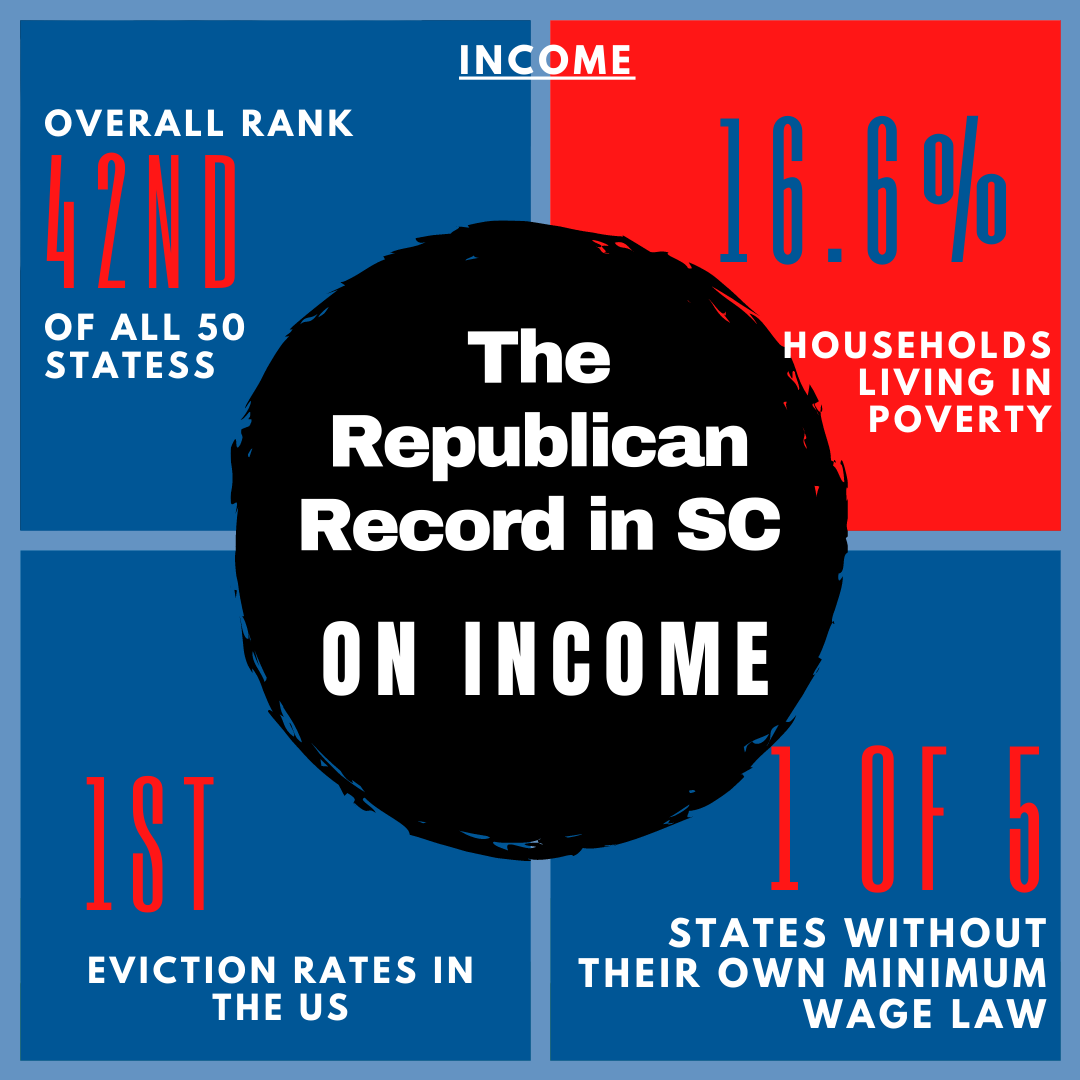 As we look a bit more deeply into income by groups in SC, a bleak picture comes into clearer focus.  Disparities loom large between wealthy and poor, men and women, and White and Black citizens.

In our state, the richest 25 percent of households receive 72 percent of total income in the state, while the poorest 20 percent of households are receiving just 3.  Only nine of the state’s 46 counties report average household incomes above the state’s media. Households in the richest county, Beaufort, are paid 59k, while in the poorest, Allendale, they are paid $25k.  Over the nine year period, between 2009 and 2018, the inflation-adjusted income of the poorest households rose by 6 percent, less than 1 percent a year. During the same time period, the incomes of the wealthiest 5 percent of citizens rose 18 percent, three times faster. And from 2006 to 2017, average rents increased 18 percent.

What are some of the effects of these figures?   In South Carolina, 16.6 percent of households live in poverty well below the national average of 13 percent. Women are the largest percentage of those in poverty. This is especially troubling, since as of 2018 almost 9 percent of SC households are led by a single mother, the 6th highest number of single mother households in the nation.  Correspondingly, poverty disproportionately strikes SC’s children, with more than 35 percent of our children in rural areas growing up in poverty, and almost 21 percent in urban areas living in poverty.  One quarter of the state’s children overall live in poverty.

This poverty directly translates to housing insecurity.  In 2016, the most recent year for which there is data, South Carolina’s eviction rate, of almost 9 percent of tenants, was the highest in the nation.  North Charleston, where more than 10 households were evicted every day in 2016, had the nation’s highest city eviction rate at 16.5 percent.  Columbia, our state’s capital city, ranked 8th worst nationally, evicting more than 6 households every day. 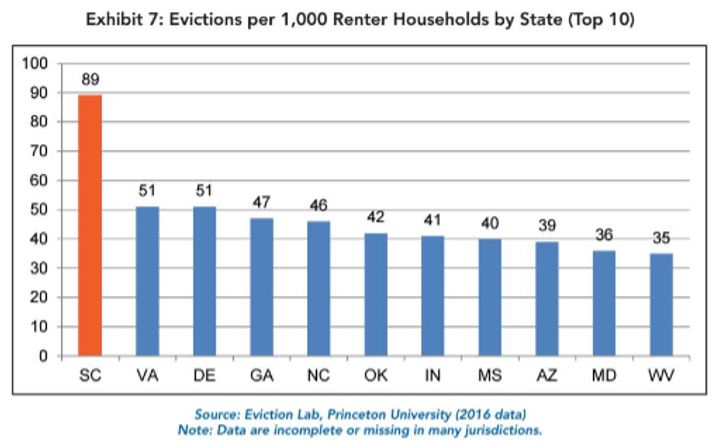 Even while  32 percent of South Carolina households cannot meet their basic needs on a monthly basis, the state legislature has refused to establish a minimum wage in the state.

South Carolina is one of just five states that have not passed a minimum-wage law, leaving workers subject to the federal rate. That federal minimum is $7.25 an hour and has not changed since 2009.   Research suggests the wages of approximately 684,000 SC workers, 1/3 of the workforce, are minimum wage workers. Tipped workers – typically restaurant employees – make even less: $2.13 per hour.

As long ago as 2015, a Winthrop poll reported that 68 percent of SC residents supported a higher minimum wage for the state. Three times in the past five years, as the state spiraled into an eviction crisis, Democrats introduced legislation to raise the minimum wage. Each time, those bills died in the Republican-controlled House.

In a time when 22 percent of workers in our largest and capital cities are paid less than $10/hr, and the typical renter can’t afford a 2-bedroom apartment in 41 of our 46 counties, South Carolina can’t afford any more time under Republican policies.

In 2019, the National Low Income Housing Coalition looked at the housing crisis facing workers across the country. This is one category where South Carolina is not at the bottom of the states, but it’s hardly a success story. The state ranks 31st at a $17.30 hourly wage that an individual or family would need to earn to afford the Fair Market Rent for a two-bedroom apartment or home without paying more than 30 percent of their income. That’s nearly $36K, a threshold something less than 42 percent of the state’s workers attain.

A two-earner, working-class household making minimum wage could not afford that average rental home for their family on their own. They would need at least a part-time income to make up the difference. Assuming an annual 2 percent increase in their salary, it would take that couple 10 years to attain the level where their full-time salaries alone would be enough for the apartment. A 2 percent increase would be more than double the increase minimum wage workers in South Carolina have seen over the past near decade.

In February 2020, CBS covered the state’s income inequality as part of its advance work for the Democratic Candidate’s Debate. In that story, it reported: “One state lawmaker (Rep. Tim McGinnis, R-Horry County) told a local news outlet in December that raising the minimum wage in the state is a “non-starter” because the competitive job market means that most employers are already paying higher than the $7.25 hourly base rate.”

A close look at wage distribution and disparity across the board in South Carolina, where 27 percent of the state’s 2.3 million workers make less than $10 per hour, clearly illustrates that is not the case. And there’s little hope on the horizon that will change.