The Bray is the monthly newsletter of the Greenville County Democratic Party. Each month’s edition features updates on issues, candidates, events, and ways to get involved. Subscribe now to connect with the GCDP and get The Bray in your inbox every month. 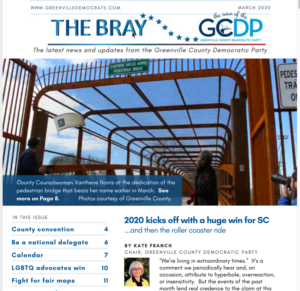 Also included in this jam-packed issue: