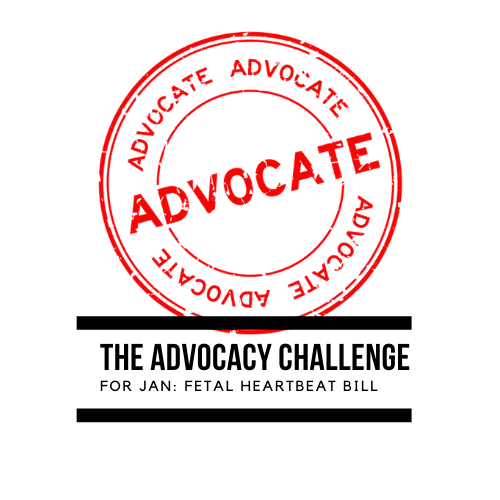 The advocacy challenge: Fetal Heartbeat bill is back

NOTE: This bill was voted out of committee today (Jan. 21) and is moving to the Senate floor. So it is very important that we take action now. Keep reading.

So many of us want to make a difference. We have things to say. Issues to stand up for. Wrongs to speak out about. And most of us do that on social media. While that’s a great personal outlet, it does little to sway the opinion of the elected officials who are making decisions. In January, we are re-launching our Advocacy Challenge. Our goal is to identify an opportunity each month to advocate with the intention of influencing results, not just releasing anger.  The Advocacy Challenge will focus on an issue or piece of legislation that is currently on the front burner in South Carolina or Washington. We’ll give you information and ask you to personally contact – either by mail or phone – the relevant elected officials and let us know how it went. Our advocacy expert – Sharon Klompus – says phone calls carry the most weight.

This month’s challenge is on the Fetal Heartbeat Bill  now in front of the State Senate. This bill failed to pass in the last session, and now it is – inexplicably – the first medical or health initiative that Republican leadership put forward.

The Issue: In case you thought that a pandemic might be the most important health issue confronting our elected officials, we can disabuse you of that notion. Senate bill S-001 is the next iteration of last year’s attempt to virtually end abortion in the state. The Fetal Heartbeat Protection from Abortion Act was introduced by senators Grooms, Verdin, Kimbrell, Garrett, Martin, Shealy, Climer, Corbin, Cromer, Rice, Adams and Hembree, and fast-tracked to the Medical Affairs Sub-Committee, which held a hearing last week.

The bill would make abortion illegal once a fetal heartbeat can be detected. The only exception appears to be if the pregnancy would threaten the life of the mother. Even rape and incest are not exclusions. Doctors who perform abortions following the detection of a heartbeat are liable to fines and criminal penalties including jail time.  The only change from last year’s bill appears to be the ban takes effect at eight weeks instead of six weeks, or with the detection of a heartbeat.

In November, Republicans flipped three Senate seats and a House seat. This has emboldened them to think that they can not only get this bill passed, but an entire package of draconian, anti-women’s health legislation. According to the Post and Courier:, these pickups have Sen. John McCravy (R-Greenwood), chair of the SC Family Caucus,  optimistic about the fate of his omnibus SC Stands for Life Act, a package of laws that includes fetal heartbeat, barring dismemberment abortions, requiring informed consent on chemically induced abortions and an instant ban should the U.S. Supreme Court overturn Roe v. Wade, the landmark 1973 case that gave women the right to terminate a pregnancy.

The challenge: Contact your State Senator (click here if you need to find out who they are and get contact information) immediately make your opposition to this bill heard. Most likely you will speak to an aide. Make sure they take your name and address. Also get their name. Ask them if they are getting a lot of calls on the issue. They may or may not tell you.

Tell us how you did:. On Facebook, Twitter or Instagram, post a comment on your experience with the #AdvocacyChallenge-FetalHeartbeat. If you had a particularly good response, you may want to share your specific “ask.” Or how you approached the call. We may highlight some on social media and use the experiences to encourage others to engage in a more personal and effective way with our elected officials.