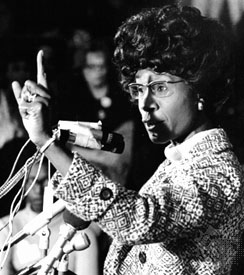 This post originally appeared in the DWGC monthly newsletter, The Donkey’s Tale, in March 2021.

Women’s History Month is observed in March and is a celebration of women’s contributions to history, culture and society. This commemoration, which began in 1987, is a special time dedicated to the amazing accomplishments of strong, determined women. Women’s history is full of stories of trailblazers who fought for women’s rights and equality in the United States.

One such trailblazer was Shirley Chisholm, who was affectionately known as “Fighting Shirley”.

Growing up, it was typical for our family to discuss politics around the dinner table every evening. We would chatter about the day’s events, listen to shared stories, watch the evening news and then become engaged in discussions about world events. I was in my early teens when Congresswomen Shirley Chisholm arrived on the scene. She was charismatic and outspoken and was the buzz and excitement around our dinner table. Keep in mind, 1968 in the United States was a time of great strife and unrest. In the midst of this calamitous year, Shirley Chisholm was to be a shining star – a bold, bright, success story.

In 1968, Shirley Chisholm would become the first black women to be elected to Congress. She was a children’s educator from Brooklyn, New York, and had served in the New York legislature. She easily won her race in her Brooklyn district.

It should come as no surprise that Chisholm quickly made her presence known in Congress, and her first order of business, upon arriving in Washington, was to challenge her committee assignment. After initially being assigned to the House Forestry Committee, she shocked many by demanding reassignment. This was unheard of at the time. “Fighting Shirley” was not deterred and was reassigned to Veterans’ Affairs, and then moved to the Education and Labor Committee. Shirley often said, “If they don’t give you a seat at the table, bring a folding chair”.

Shirley Chisholm had long been known for breaking barriers. With the motto “unbought and unbossed”, Chisholm would make history, becoming the first Black woman to make a bid to be President of the United States when she ran for the Democratic nomination in 1972. She would say, “I want history to remember me not just as the first black woman to be elected to Congress, not as the first black women to have made a bid for the presidency of the United States, but as a black woman who lived in the 20th century and dared to be herself.”

Shirley proved to be a dynamic, charismatic Congresswoman and would go on to have a long career in politics serving seven terms in Congress. She was a champion of education and was known for fighting on behalf of minority and women’s issues during her tenure. As a trailblazer, Chisholm was a founding member of both the Congressional Black Caucus and the National Women’s Political Caucus. When asked how she would like to be remembered, she replied, “I’d like them to say that Shirley Chisholm had Guts”.