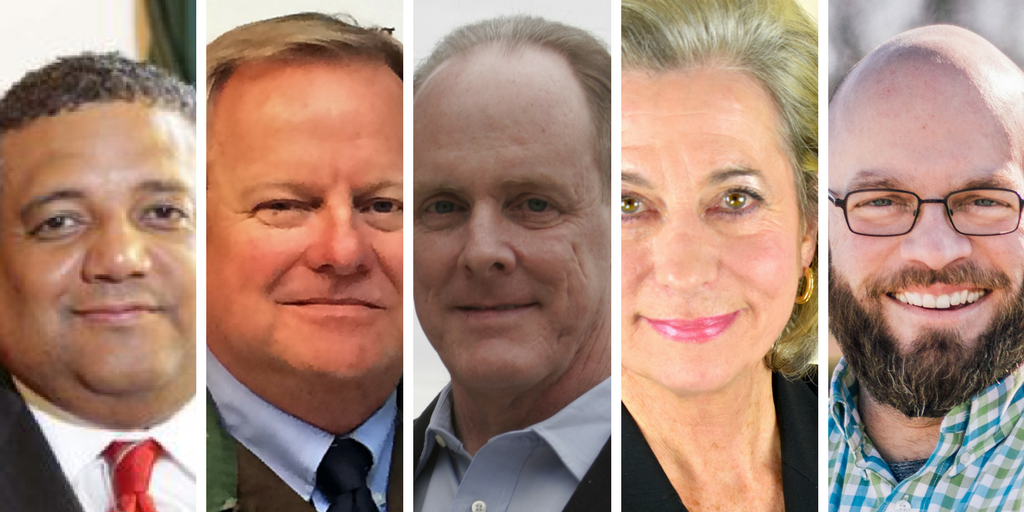 The five candidates vying for the Democratic nomination in SC-4 participated in an issue-focused forum organized by College Democrats of USC Upstate and the Spartanburg County Democratic Party on April 18.

Roughly 100 attendees, many of them students, were in the audience for the event, which was moderated by political science professor Scott Harris.

Emphasizing her role as a woman in the business world, Turner highlighted the need to find that “sweet spot of mutual benefit” for both sides. Morin, a volunteer EMT and firefighter, declared himself a “bold progressive” and a supporter of clean energy.  Graben introduced himself as a business lawyer who thinks we should “stick to our guns” and “convince Republicans that we are right.” He also emphasized his faith as a Christian.  JT Davis stressed his history as an Army veteran and a USC Upstate adjunct professor of engineering. Finally, Brandon Brown talked about his role in the local community, the need to bring resources back to the state, and the importance of putting “the fourth district first over party.”

On student debt: The candidates were in general agreement about the need to lower student debt burden but disagreed on solutions. Brown suggested more equal opportunity grants. Turner called for making students’ entire debt payment tax deductible, rather than just the interest. Davis and Graben focused on the need for financial involvement on the part of the business world, and Morin wanted to promote trade schools to give students more options.

On gun violence: All the field supported universal background checks and higher age limits to purchase weapons. Graben, Brown, and Turner promoted a ban on assault weapons, though Brown would give exceptions to veterans and others who show capability.  Davis preferred a special weapons permit to a complete ban.  Turner also suggested the use of biometric trigger locks, while Morin mentioned limiting magazine capacity and offering buyback programs.

On criminal justice reform: The candidates offered varying alternatives to this issue – a question submitted by students in advance. They ranged from educating young adults on how to interact with police to the need for alternatives to jail, amending federal sentencing guidelines, eliminating for-profit prisons, and establishing drug courts. All said they favored the legalization of marijuana.

On DACA and Dreamers: All five candidates averred their support for DACA and the need to protect Dreamers. They also agreed on the need for increased border security, though none considered a wall to be the solution. Brown proposed investing in technology and trade. Graben described the wall as an insult to Mexico, and Turner called it a product of racism.  She and Davis agreed the building of a wall would waste resources, while Morin said he was more worried about Russia than protecting ourselves from Mexico.

On engaging marginalized black voters: Morin discussed the problem of systemic racism, and Graben focused on the need for mentoring programs. Many discussed the importance of listening to their constituents. Brown added that he learned about the struggles of African Americans growing up in the Fourth District.  Davis followed up by stating that he was “just a white guy” who was “almost clueless” on minority issues. If elected, he said, he would call Brandon Brown for advice.

There were several questions from the audience ranging from the possibility of a black market developing in reaction to an assault weapons ban, the need for more affordable housing, the lack of adequate public transportation, and the need for a living wage.

As the discussion drew to an end, the candidates were asked to differentiate themselves from each other.

Brown summed up his position by talking about the need for a wake-up call in November and the importance of setting aside party politics for the good of the country. Davis said he would prefer to be termed a “lite-Democrat” who could turn out independent voters.  Graben described himself as a pro-business Christian, a staunch Democrat, and not a “Republican-lite.”  He told the crowd he wanted to bring America together and that they should  “pick the candidate you’re proud to take home to both your Democratic and Republican friends.”   Morin once again called himself a “bold progressive.” Turner reminded the audience of her position as a woman in business and her ability to work with the other side. She emphasized that she was the first candidate to announce a year ago because of her passion about tax reform and that she has had her boots on the ground every day since. She concluded by saying that “this is a battle for America, and I am a warrior.”