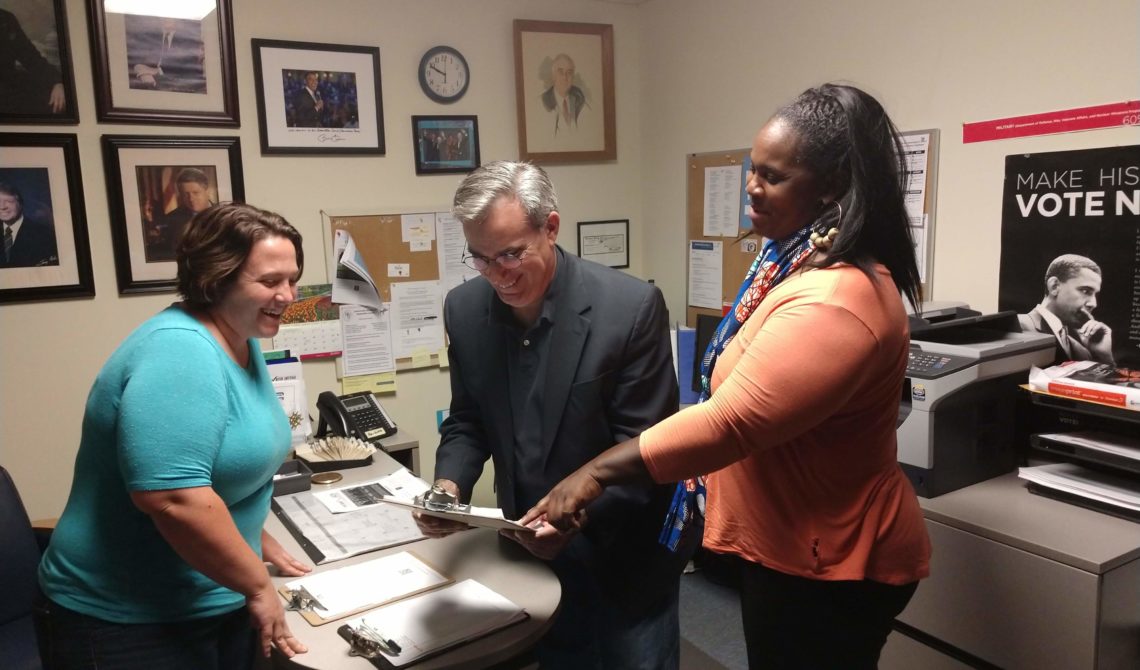 Q&A with Paul Merlo on volunteering and impact.

“If your actions inspire others to dream more, learn more, do more and become more, you are a leader.”
–

This is another in our continuing series of Q&As with members of the GCDP. Management Team. Paul Merlo is the co-cordinator of volunteers for the party. A transplant from a blue-state background to a red-state reality, Paul has decades of experience in political organizing that he brings to the effort to turn South Carolina blue.

I was born in Pittsburgh, PA, and lived most of my life there. My daughter is a public school fourth grade teacher in a Virginia. I am no longer married. I graduated from the University of Pittsburgh with a BA in a special studies program of Philosophy and Political Science with a concentration in moral philosophy and a minor in economics. I also had minors in English Literature and Religious Studies. I had been politically active in Democratic politics since I was 15 and planned to make a career in public service but I learned that you could spend your whole career helping others get elected without making a real contribution to policy. I loved the process of politics, but I wanted to make sure that my life made a real difference at something.

When I graduated, a confluence of qualification, experiences, connections and dumb luck gave me the opportunity to be the first patient’s advocate at a newly opened county nursing home. This was real advocacy work.  Eventually, I moved onto a faith-based not-for-profit that is a leader in dementia care.  During that time, I had the privilege of leading a team that began to use Montessori and other teaching methods to create new interactive care modalities that made unexpected and truly lifechanging improvements to functionality and quality of life.  Six years ago, I changed direction. I accepted a grant-funded position to develop and initiate a STE(A)M+ Academy in a very small public school in an unincorporated rural community in the Oklahoma Panhandle. After four years, the grant funding expired.  At that time, a family member who lives in Greenville had some healthcare needs. I came here temporarily to help but fell in love with the community and have decided to stay.

Q. You’ve got a long background in Democratic politics; can you describe your experiences?

I was 7 years old in 1968 and lived in a family of working-class adults who talked and debated intelligently, thoughtfully, and openly about events in the nation like civil rights, the Vietnam War, Nixon and other issues. Even then, I knew that the idea of the United States that I was learning about in school and church, and which inspired and captivated me, was not fully realized in the real world. It is a work in progress and each generation, each individual really, has the opportunity and duty to bring us closer to that idea upon which our nation is founded. By age 13, I knew that the Democratic Party represented the best avenue for us to become the nation we were founded to become. At 15, I volunteered on my first political campaign (we won) and accepted steadily more and more responsibility from the local Democratic Party. At age 16, I managed my first campaign, a candidate for state legislator (we lost). Since then, I have remained very active in Democratic politics and campaigns on all levels of government. Prior to moving to Greenville, I was on the board of directors for Western PA for Kerry, a canvass director in Allegheny County for President Obama’s re-election in 2012, and did a little field work for Wendy Davis’ gubernatorial campaign in Texas in 2014.

Q. You must have felt out of place moving to SC, do you think we are catching up – as Democrats?

Actually, moving from very, very “blue” Pittsburgh to the “infrared’ Oklahoma Panhandle was a more interesting adjustment. Still, when I moved here, my expectations were very low. It is, after all, the state of Lindsay Graham and Trey Gowdy, but it is not as dogmatically extreme as Oklahoma. Truthfully, I was not planning to stay and was not invested. In a way, I viewed it as a sort of decompression; the way you might recover from a time deep in the ocean before returning to the surface. Pink SC was the intermediary stage I needed before I could return to blue Pittsburgh without my blood boiling and my head exploding from the change in political pressure.

It has been an inspiring, invigorating surprise. I have found the vision of the party leadership to be bold, ethical and yet remarkably pragmatic and intelligent. The GCDP strategic plan is comprehensive, intricate and well thought out. The community is a fabric of compassionate, well-versed, intelligent and motivated individuals committed to positive change in many important issues. There are more Democrats than I expected, and they are making themselves known in greater and greater numbers and with more and more energy every day.

Q. How important will volunteers be in the upcoming municipal elections as well as the run up to 2020?

The GCDP is a party of volunteers, all the way up to the party chair. But that makes sense because really, we are a nation of volunteers. Individuals, stepping out from the personal priorities of their private lives to work together for the common good; to contribute their combined energy to forge a “more perfect” union than what was passed on to them. Our story as a people really begins, not with “once upon a time” but with: “We the people”. Those words are the mantra of our democracy, they are the motto of American volunteerism, they are the key to our future success as a community of free people, here in Greenville and as a nation.

Q. What’s the most important quality of a volunteer?

There really isn’t one paramount quality. In some ways, this answer depends on the particular role that the indivual fills. But I think it always starts with this: Be sincerely yourself. When you do that, you engage others with the best of who you are, and your words and actions have credibility and impact. In addition, the volunteers who carry our party’s message to the voters become effective when the learn to listen to, understand and speak using the meaning of words as they are understood and used by the voters we want to persuade. When we engage with voters using their words and their understanding of those words, we can engage in meaningful dialog and truly begin to educate and persuade.

Q. Two-parter: What’s the most moving, empowering experience you’ve had as a volunteer BEFORE coming to SC? And same question since you’ve been the volunteer coordinator?

One day, during my first campaign, I was tasked with leading a group of student volunteers to deliver absentee voter applications to residents in local nursing homes. My team went to a private, faith-based home with a stellar reputation. The facility was clean, did not have unpleasant odors and the staff was courteous, helpful and even seemed affectionate with the residents. We had a list of names and the residents that I visited were clean, dressed appropriately and groomed. Still, there was a cloud of loneliness and despair that hung with suffocating heaviness in the air. It overwhelmed me, it seemed to cling to my clothes and skin.

When we got back to the car, I began to weep. I had not cried in front of anyone else since my parents divorced four years earlier.  It shook me to realize this was in my community, in America, in the 20th century and that this was a choice. We treated these aged souls this way not because we couldn’t do better but because choose not to do better. Back at HQ, more composed but still distressed, our campaign manager took me aside. He was unyielding: This is way we are working so hard; this is why the campaign is so important; this is why my contribution is vital—stay with the campaign and fight to make a difference or slink away and whimper in the dark-it was my choice, but one way or the other make it and stop wasting time. We had important work to do and damn little time to do it. I stayed.

I have seen the same reaction on the faces of some of our volunteers as we have canvassed in some of our neighborhoods here in Greenville. I’ve watched the realization sink in that this is in Greenville, this is America, this is the 21st Century, and somehow, we’ve chosen to let this happen and let it continue. I’ve seen the weight of this realization engulf and weigh them down, shoulders slump, pace becomes a shuffle, tears forming. I haven’t shared the pep talk that salvaged my activism. I haven’t had to—every one of them has come back and remained an active volunteer. What a remarkable group of people we have on our team!