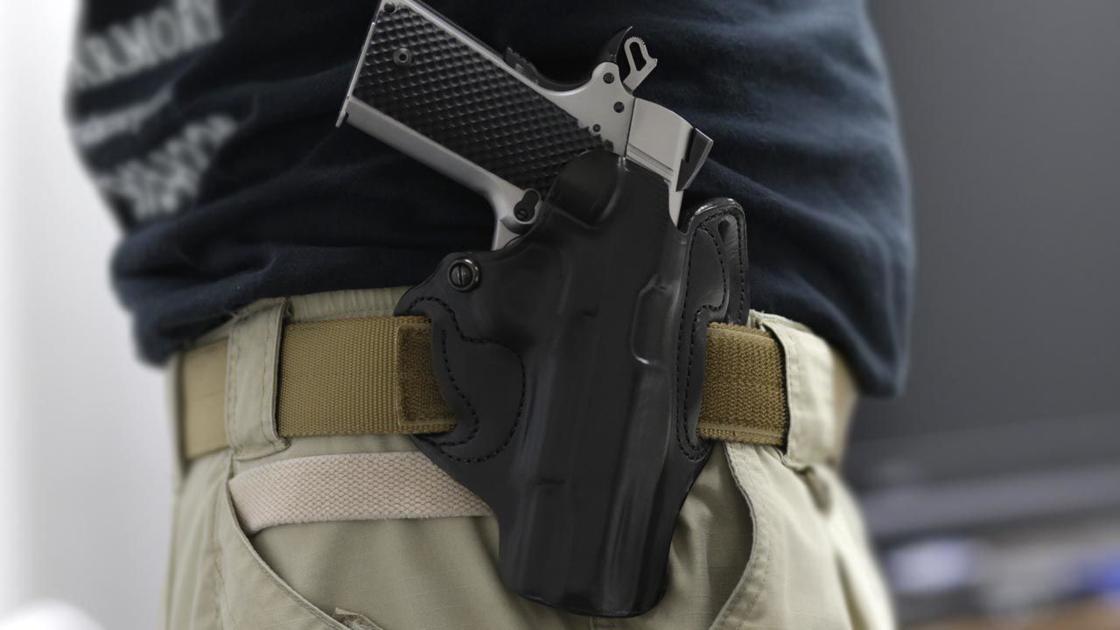 So many of us want to make a difference. We have things to say. Issues to stand up for. Wrongs to speak out about. And most of us do that on social media. While that’s a great personal outlet, it does little to sway the opinion of the elected officials who are making decisions. Instead, our goal is to identify an opportunity each month to advocate with the intention of influencing results, not just releasing anger. The Advocacy Challenge will focus on an issue or piece of legislation that is currently on the front burner in South Carolina or Washington. We’ll give you information and ask you to personally contact – either by mail or phone – the relevant elected officials and let us know how it went. Our advocacy expert – Sharon Klompus – says phone calls carry the most weight.

This month’s challenge focuses on legislation currently before the State House of Representatives that would allow “open carry” of handguns in public, with some extreme lawmakers pushing for open carry with no permit or training required.

The Issue: Republicans in the State House and Senate, taking advantage of their increased majorities since November, are again attempting to loosen gun safety laws in the current legislative session. The most likely to pass is H.3094, the “Constitutional Carry With Training Act,” which was forwarded out of the House Judiciary Committee earlier this month. The bill has nearly 70 sponsors, including several from the Upstate, and would allow South Carolinians with a concealed-weapon permit to openly carry their handguns in most public places, with exceptions for schools, businesses that choose to bar guns, and – ironically – the State Capitol. The House is likely to pass this or a similar bill, and although passage is less certain in the Senate, several Republican lawmakers support more aggressive legislation that would drop any requirement for a permit or training to own a gun, regardless of whether the weapon is openly carried or concealed.

SC Republicans have aggressively pushed for fewer restrictions on gun ownership in past sessions, but either didn’t have the supermajority that would allow them to ignore Democratic objections, or circumstances – like an inconveniently timed mass shooting – made passage more difficult to justify. The most aggressive among them, like Jonathan Hill (R-Anderson) claim that they are defending the Second Amendment against such “infringements” as registration and training. Referring to the large Republican majorities in both houses, Hill recently posted on his Facebook page a comment he’d made in reference to the passage of looser gun bills: “Whatever the House sends the Senate, the political environment is such, with a 30-member historic majority in the Senate, they will pass whatever the House sends them. Politically speaking, they have no choice.”

The notion that Republicans should pass gun legislation that increases the likelihood of violence just because they can is troubling. The State has reported that law enforcement is generally opposed to “constitutional carry,” citing concerns about the potential for confusion if police respond to a call in which an individual – for example, “a good guy with a gun” – is brandishing a weapon in public. Even Rep. Bobby Cox (R-Greenville), the bill’s primary sponsor (who also happens to be an executive at a major gun manufacturer), has admitted as much. Although the South Carolina Sheriff’s Association has taken a “neutral” position toward the legislation, its request that it be amended to deny open carry near events like protests or parades was voted down in committee.

A Post and Courier editorial in February highlighted Republicans’ cynicism on this issue, pointing out that “Most S.C. legislators know the claims that having more armed citizens makes us all safer are at best wishful thinking, at worst dangerously wrong.” The editorial added that laws like H.3094 are moving forward despite opposition from “concealed weapons permit holders, doctors and police officials who warned that it would encourage aggression and assist in intimidation efforts and make it nearly impossible for police to tell the good guys from the bad guys.” With Greenville increasingly known as a tourism destination, do we want the lasting image that visitors take away from our city to be one in which our sidewalks are filled with openly armed citizens? Really?

The challenge: With House passage very likely, focus on contacting your State Senator (click here if you need to find out who they are and get contact information) and immediately make your opposition to this bill heard. Most likely you will speak to an aide. Make sure they take your name and address. Also get their name. Ask them if they are getting a lot of calls on the issue. They may or may not tell you. For your convenience, we’ve included suggested talking points to use in your conversations.

Tell us how you did: On Facebook, Twitter or Instagram, post a comment on your experience with the hashtag #AdvocacyChallenge-OpenCarry. If you had a particularly good response, you may want to share your specific “ask” or how you approached the call. We may highlight some on social media and use the experiences to encourage others to engage in a more personal and effective way with our elected officials.