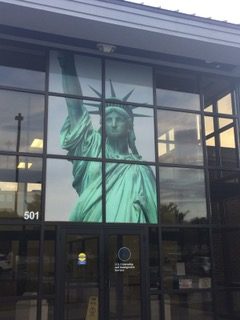 On July 12, protestors in the Upstate joined a national protest called Lights for Liberty to demand an end to inhumane treatment of immigrants at the southern border. Melinda Menzer was one of the speakers. Her remarks are reprinted here with her permission.

I am alive today because my grandfather had the right piece of paper.

In 1925, my grandfather came to this country, leaving behind his entire family.

In 1941, the German army invaded his town — Jurburg, Lithuania — and handed out guns and whiskey to the Christian Lithuanians. Over the course of four months, those ordinary people murdered 2000 Jewish Lithuanians, their neighbors, and my family. A town of 15,000 people became a town of 13,000.

By 1941 my grandfather was married, with three children; he and Grandma started a business, one that my cousin still runs. Why didn’t his family join him in the US?

And the US immigration system of the time allowed in many many more Germans than Lithuanians. The quota system set up in the 1920s was designed to preference immigrants from predominately Protestant countries (like Germany) and to exclude immigrants from Eastern and Southern Europe, from Catholic and Jewish countries. Quotas controlled the number of people entering the US from each country.

When Jews started trying to escape Europe in the 1930s, we did not change the quota system. People tried: petitions were signed; legislation was introduced. The Wagner-Rogers Child Refugee Bill, introduced in 1939, would have permitted 20,000 German Jewish children to escape from Nazi Germany. But it didn’t pass. We did not admit them. Because, to quote Laura Delano Houghteling, FDR’s cousin and the wife of the US immigration commissioner, “20,000 charming children would all too soon grow into 20,000 ugly adults.”

And so many of those 20,000 children never got the chance to grow into adults.

It would be nice to be able to say that as soon as we learned of the full horrors of the Holocaust, the death camps, we changed the system and started admitting asylum seekers, but we didn’t. Jews and other refugees were trapped for years in Displaced Persons camps. One Holocaust survivor, interviewed in 1982, described her family’s situation:

In Italy we sat in a Displaced Persons camp. It was like being in the ghetto again. We were there for three and a half years. . . . We wanted to go to Africa, to Australia, to Israel. We would go anywhere where we could live in freedom but nobody wanted us. Nobody opened their doors to us. Nobody wanted to take us in. So for three and a half years, we waited until we finally got a visa to come to the United States.

Those are the words of Rae Kushner, Jared Kushner’s grandmother. But they are much like what an asylum seeker at our southern border might say today. Like Rae Kushner, they want to live in freedom. But nobody wants them. They are trapped for lack of the right piece of paper.

In 1980, Congress passed the Refugee Act. Its purpose is to provide a path for asylum seekers. We set a target number of refugees per year, increasing or decreasing it to meet the global situation. In its first year, under Reagan, we admitted over 200,000 refugees. That number has fallen and risen, depending on the need, from Reagan through Obama, regardless of administration, until 2017 — when the numbers plummet.

In 2017, we admitted barely 10 percent of what we admitted in the first year of the Reagan administration. We are being approached by rising numbers of asylum seekers, but we have seen numbers like these and more. We could admit these people. We have the legislation and the infrastructure. The Trump administration is refusing to do it.

For 75 years, we have been saying that we must learn the lessons of the Holocaust. But some people seem only to have learned how argue about whether something is like or unlike the Holocaust — how to split hairs and argue semantics

Two years ago I got into an argument with a man. It was at the time that the Anne Frank Center in NYC was working to get the US to admit Syrian refugees, making the comparison between Syrian refugees and the Frank family. The Franks had applied for visas to come to the US, but they were denied. The Anne Frank Center argued that US must not deny asylum seekers a place of refuge again.

But this man told me that the situation of Syrian refugees was nothing like the Franks’. He explained that the Holocaust was an organized genocide, with trains and cattle cars, death camps, ovens. There was a whole apparatus to kill the Jews, and there is no apparatus like that in Syria.

And I said, Are you telling me that what you have learned from the Holocaust is that we only need to save people from violence and death if their killers are organized?

The Jews of Jurburg were not put on trains and taken to camps. They were massacred. My great-grandmother, Frieda, was probably among the older women, children, and babies, who were taken to the elementary school, forced to dig their own graves, and shot into pits. And when the murderers realized they didn’t have enough bullets to kill them all, they picked up the smallest children and beat them to death to save on ammunition.

I asked the man, were their deaths too disorganized to count?

All the deaths count. All the suffering counts. Because all people count.

Here are the real lessons of the Holocaust:

First, there is no master race. All human beings are worthy of life and liberty.

The people in the camps sleeping on concrete floors, eating rotten food, children crying for their parents, parents wondering where their children are — they are there because they don’t have the right piece of paper, they were born on the wrong side of a line.

You need to call and write and visit your representatives.

You need to protest, downtown Greenville, tomorrow noon, in front of the Old County Courthouse on Main St. and everywhere else.

Melinda Menzer is an activist and professor of English at Furman University. She teaches linguistics and early medieval texts.