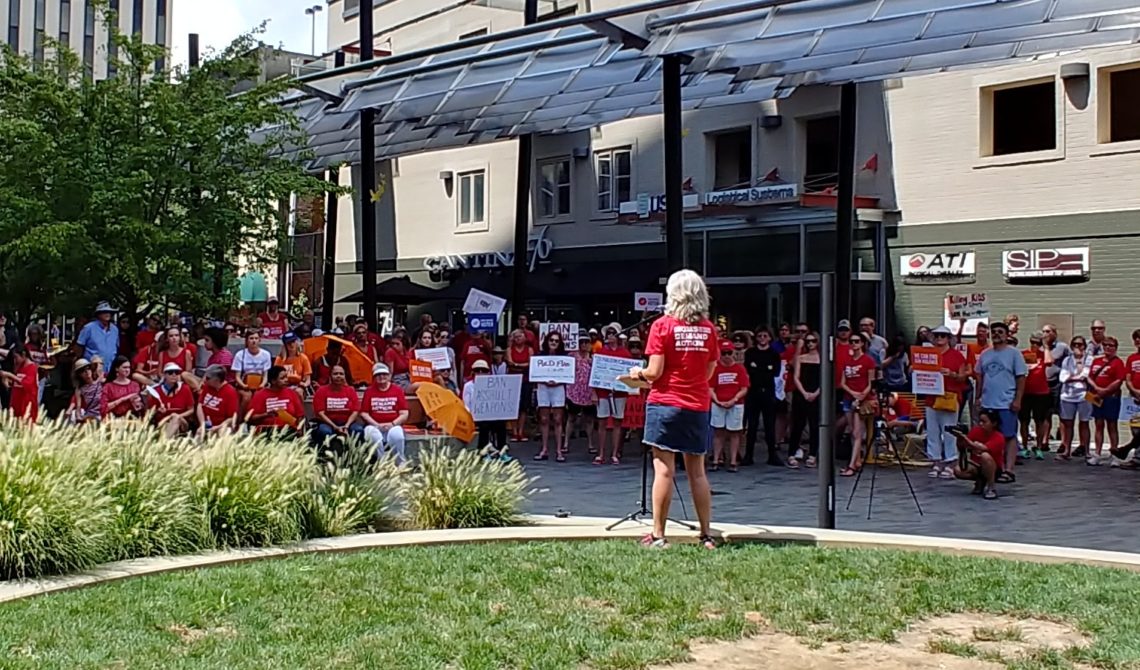 The Greenville chapter of Moms Demand Action for Gun Sense in America hosted a rally to end gun violence that attracted nearly 300 animated supporters on a recent sweltering afternoon. The event was one of hundreds held around the country during the weekend of August 17-18. The red-clad crowd at One City Plaza included retirees and young families with children, high school and college students, activists and citizens who’ve simply had enough of the senseless gun violence plaguing our country. Rally participants demanded “red-flag” laws to legally take guns out of the hands of people who show signs of being a danger to themselves or others and stricter background checks on gun sales.

Several speakers addressed the crowd, ranging from survivors of gun violence, to young people engaged in efforts to keep their schools safe, to advocates of gun legislation, to gun owners who support gun safety and education. The stories of survivors like Melody Geddens McFadden, who lost her mother and niece to separate incidents of gun violence, are heartbreaking to hear, and their insistence that they are in a “club that doesn’t want any more members” drives home the pain that they will always feel. At the same time, the determination of young people like Students Demand Action’s Jenna Dean to end school shootings provides a sense that the next generation may provide the inspiration to solve this uniquely American problem.

Attorney Jennifer Wells summarized pending gun-related legislation at both the national and state levels. Echoing national Moms Demand founder Shannon Watts’ point that “democracy isn’t a spectator sport,” Wells urged participants at the rally to engage with their representatives on gun-related issues. She and other speakers encouraged the crowd to text CHECKS to 64433 to be put in contact with their representatives and make their views known.

The diversity of speakers showed that differences between those who believe in stricter gun laws and those who own guns are smaller than advocates of the most extreme positions often make them out to be. Bill Ware, who runs the Facebook page “Gun Owners for Responsible Gun Control” and who addressed the gathering, quickly became passionate about the many simple steps that all gun owners can take to be safe. “The Constitution doesn’t declare that the Second Amendment rights of one person overrule other people’s rights to life, liberty, and the pursuit of happiness,” he said immediately after the rally. Recalling the recent death of a Greenville toddler who found his grandmother’s unsecured and loaded handgun and fatally shot himself, Ware lamented, “We need to count on good [trigger] locks, not good luck.”

Those who attended the rally needed little convincing that now is the time for common-sense gun laws – the Moms Demand Action mantra – and their comments betrayed frustration with the status quo. Asked what had brought her to the rally, Cheryl Taylor, of Greenville, said, “I’m a mom, an African-American, with boys; I’m a health care professional and a human being.” Susan Pfeiffer, who had driven from Asheville to attend the rally, added, “I’m not a mother, but I believe that no kid should have to be fearful of being shot at school.” As speaker after speaker noted, channeling that frustration into action as part of a nationwide network of moms and allies determined to reduce gun-related violence is the key to changing our country for the better.