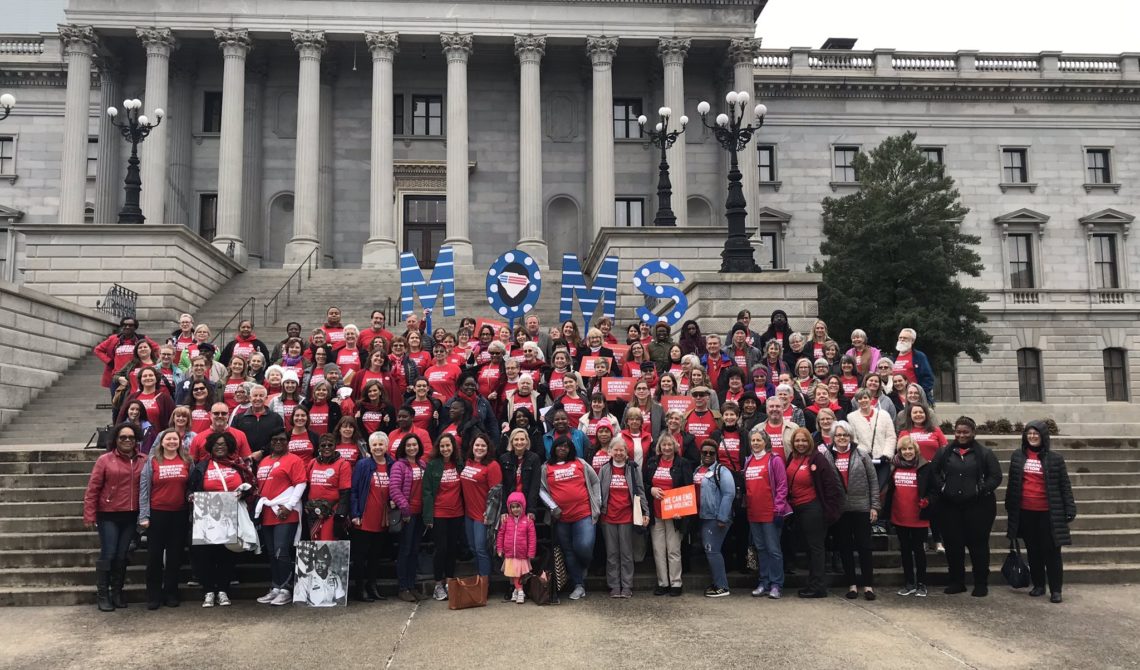 Moms Demand Action for Gun Sense in America is an activist organization that advocates to prevent gun violence. That includes fighting laws to loosen restrictions, while lobbying for common sense controls. This is one of an occasional series to spotlight the work of activist organizations in Greenville County that you can get involved with.

The statistics on gun violence in the United States are sobering. Roughly 100 of our fellow citizens die each day from gun violence, and Americans are 25 times more likely to be shot and killed than people in other developed countries. Every month, 50 American women are shot and killed by current or former intimate partners.

Regardless of how they are defined, mass shootings and school shootings are increasing in frequency. Deadly shootings have become so commonplace that we’ve come to think of them as unavoidable. We use a gruesome shorthand of place names to refer to shootings: Sandy Hook, Aurora, Charleston, Orlando, Townville, Las Vegas, Parkland. There literally are too many to remember them all. The shootings continue; local and national politicians offer “thoughts and prayers,” shrug, and move on to the next thing; the gun lobby asserts that arming more people will prevent gun violence; and the cycle resumes.

The frustration, born of a sense that there’s nothing we can do, can be overwhelmingly depressing, so many of us choose to compartmentalize it.

But what if there was an organization that could prove that common-sense gun legislation isn’t an exercise in futility?

Enter Moms Demand Action for Gun Sense in America. Founded in the aftermath of the Sandy Hook Elementary School shootings in 2012, Moms Demand Action falls under the umbrella of Everytown for Gun Safety, an organization with more than five million supporters nationwide, devoted to objective, nonpartisan research on gun violence. The goal of Moms Demand Action is decidedly not to “take your guns away”; many members are gun owners themselves. Instead, the group focuses on initiatives like criminal background checks for all gun sales and keeping guns out of the hands of people with dangerous histories.

With chapters across the country, the organization has worked with lawmakers at the local, state, and national levels to pass common-sense gun legislation and shelve bills that would increase the risk of gun violence. Even in “red” states like Kansas, Tennessee, Texas, Oklahoma, and both Dakotas, Moms Demand Action has contributed to passage of “Red Flag” laws and the defeat of bills that create or strengthen “Stand Your Ground” laws. Recently, Moms Demand Action successfully challenged Starbucks’ policy of allowing customers to bring concealed, loaded guns into its stores and got Facebook to crack down on illegal gun sales on its platform. 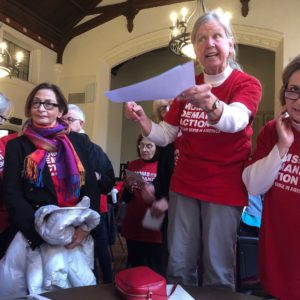 Moms Demand Action in Greenville, one of eight South Carolina chapters, is typical of the nationwide organization. Jean Fontaine, the group lead for the local chapter, describes supporters as “foot soldiers” who “show up” for opportunities to influence their elected officials, whether in person in their signature red t-shirts or through phone calls and letters. “The goal is to educate at the local level,” Fontaine says, adding that the group works with local police and educators, as well as any elected official or candidate, regardless of party affiliation, “who advocates for gun sense.”

Many Moms Demand Action supporters work to hone their “elevator pitch” – a 1-3-minute personalized speech to use with politicians and others who may be influenced to support the group’s goals.

Terry Taylor, the Greenville chapter’s legislative lead, emphasizes that building relationships with elected officials before key events is a key to progress. A veteran of Mothers Against Drunk Drivers – the model for Moms Demand Action – Taylor maintains an extensive spreadsheet of gun legislation making its way through the South Carolina statehouse. He tracks the progress of bills the group supports (child access prevention, closing loopholes in existing laws) as well as those it opposes (guns in schools, open or permitless carry).

Echoing Jean’s comments about “showing up,” Terry says that having a group of red-shirted Moms Demand Action supporters in attendance for what would otherwise be a routine hearing on a gun law in the Judiciary Committee has an impact on 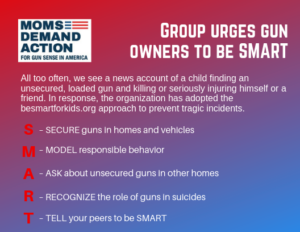 legislators. “Politicians are mostly reasonable people who are aware of public opinion,” he says, adding, “They don’t want to get caught out with their voters.”

A final and very important piece of the Moms Demand Action effort is its network of gun violence survivors who reach out to and care for other survivors of school shootings, domestic violence, a friend or relative’s suicide, or accidental shooting. Jean Fontaine points out that these survivors also have powerful, compelling, and personal stories to tell – but only if and when they are ready. Their mantra, she says, is that they “don’t want anyone else to join their club.”

Want to get involved? Sign up online, attend a local meeting (you can find chapter meetings in our calendar), email Jean Fontaine.