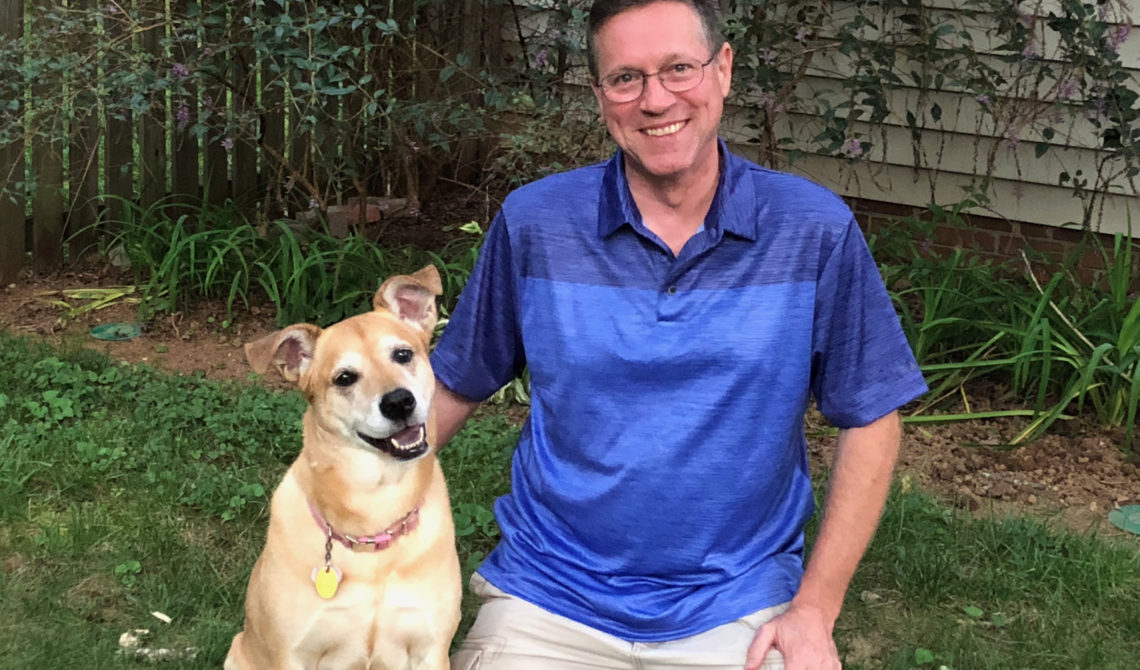 Cass Tyson is the alternate representative to the state executive committee. He’s also the leader behind the GCDP’s effort to grow our precinct leadership and activism. This is the third in a series of articles to get to know more about the party leaders and key volunteers.

Q. Give us some basic bio stuff: what you do (work wise), are you a native Southern gentleman or a Yankee carpetbagger, etc…

Although my family is from Texas and Arkansas (I was born in Ft. Smith AR), my parents relocated to Maryland when I was 4 and settled in Baltimore when I was 9, so that’s where I grew up. I lived there most of my life, with brief stints in Ohio, New Hampshire and Northern Virginia. I moved my family to Greenville almost nine years ago. So yes, I’m another Yankee carpetbagger.

I have two older sisters, my mother passed away 12 years ago, my father remarried and they now live in Frederick, MD. I’ve been married to Cate Tyson for coming up on 15 years, and we have 2 kids; Max is 13 and Josie is 11.

I went to the University of Baltimore, where I earned a BA in English, with a concentration in professional writing, and then an MA at the same school, in publications design, an intensive program that emphasized writing and graphic design equally, and threw in a healthy dose of publications management as well. It prepared me for virtually any job at a newspaper or magazine – and I later had several. This was before the Internet, of course. I graduated in 1990. After years of making a less than living wage in publishing, I went into technical services and sales. After years of selling internet access and website related services, I “semi-retired” and went into freelance consulting and content development.

Since last year I’ve been a field interviewer for a national study on drug use and mental health. Basically my job is to knock on previously selected doors and interview people about their use or non-use of alcohol, tobacco, legal and illegal drugs, and their mental health. I help collect extremely important data used by local, state and national authorities to make budget and policy decisions that affect everyone. It’s important work, but the biggest downside is the work is best done during weekends and evenings — prime political action time.

Q. Have you always been politically active?

No, in fact I was intentionally NON-politically active almost my entire life. My parents were activists when I was young, and to me that simply meant they were never home, or when they were home they were always on the phone. They always had signs to make or meetings to attend or conventions to prepare for or travel to. I’m sure they accomplished great things, but it soured me on politics. I swore I would never put my kids through that! Ironically, here I am putting my kids through the same hell, to a degree. LOL!

Q. Describe how you got involved in politics, i.e. what made you want to do more than vote?

I started paying attention to politics when they impeached Bill Clinton, because I thought that was truly a witch hunt, unlike what we see today. Because of that, I think, my focus has always been on DC, because national and international politics fascinate me, while local and state stuff seem arcane and hopelessly confusing.

But it wasn’t until Bernie Sanders announced he was running for president that I decided to get personally involved. I had been listening to Bernie for years, since his time in the House. I was familiar with his policy positions and knew they were 95 percent in line with mine. I got really excited about the prospect of a President Sanders, so I volunteered for his campaign early and did everything I could to find votes for him in Greenville.

Alas, many more South Carolinians were with HIllary Clinton, so that was that. While I wasn’t the least surprised Hillary beat Bernie, I was shell-shocked when Trump beat Hillary. I was one of millions of  Americans who knew Hillary couldn’t possibly lose and Trump couldn’t possibly win, so when they did, I was motivated to jump back into the fray. I decided to focus on the Democratic Party this time around, and not so much on individual candidates. I am of the mind that every single Republican must be run out of office, and I’m 100 percent certain the only way to remove a Republican is to replace them with a Democrat. So that’s my mission.

Q. Despite the challenges to our democracy, still large numbers of Democrats don’t vote. Why do you think that is?

I think the basic problem in the U.S. is top vs bottom, not left vs right or Democrat vs Republican. Occupy Wall Street got it right, the 99 percent stuff. Bernie’s message that we need to tax wealth and support the disadvantaged resonated with LOTS of people. The top tenth of 1 percent, the folks with concentrated wealth and power, do whatever they want, whenever they want, with and/or to whomever they want. They get their cronies elected or installed in government, then get laws passed that further benefit themselves and their rich friends, then they get to do even more of what they want, which basically means to make even more money and amass ever more power…and then do it all over again.

The reason so few people vote is they understand in their gut that the system is rigged, even if they don’t understand how or why it got that way, or how to unrig it. They understand the rich get what they want, and the rest of us live with what’s left. People instinctively know that their one measly vote won’t make much difference in the long run, that they’re not going to get what they need simply by voting,  so they shrug their shoulders and say, “Why bother?”

The difference between the two parties, to my mind, is that Democrats “punch up,” working to protect the little guy against the machine, while the Republicans “punch down,” blaming society’s ills on immigrants, gays, and of course, minorities and the poor, while doing everything they can to protect the interests of the rich, the powerful, and the corporations.

People probably don’t vote because they hear lots of right wing talking points that are well-designed to divide us, instigate conflict and create frustration, and eventually, they simply stop caring. If those diverse, down-trodden communities heard better messaging from progressive Democrats, they might come to understand Dems are the ones working to make a difference in their lives, and frankly, in everyone’s lives. Democrats truly work “For the people,” like our 2018 slogan says. Maybe if more people got that message, they would be more motivated to vote for Democrats.

Q. You are leading the precinct leadership project, designed to develop more grassroots political units at the community level. How’s it going?

Let’s refer to is as the Precinct Development Committee from now on. We tried out a few different terms over the past year, but that’s the one I think best describes what we’re doing.

And it’s going pretty well, I would say. Our first win was getting a record number of people out to the January reorganization meetings, and we have more Democratic precinct officers now than anyone can remember. We have held a few training classes, have been creating support materials and resources, and have a lot more in the works.

Our focus now is on educating them on how to spread the Democrats’ message, find and recruit volunteers, and put them to work canvassing and phone banking. To that end we created clusters of precincts, organized roughly by County Council district, and named a leader for each cluster. Cluster Leaders are preparing to hold multi-precinct meetings where people from 10 to 15 precincts can work together, get to know one another, support each other, and so on. I think this concept is really taking off, because I’m seeing a number of people really stepping up and getting involved. It’s quite gratifying, to be honest!

Q. What’s been the biggest surprise you’ve seen in working with precinct leaders?

Well, I started this with no expectations, so I can’t really say I’ve had any surprises. When I first started, I had no idea how the county party worked, how precincts work, or any of that. I had no idea how many precincts we had, how many precinct officers we had, how many volunteers or party staff we had, or what kind of resources were available. I’ve been learning as I go, and let me tell you, I’ve learned a LOT!

Q. Where do you envision the precincts in Greenville being in 2020? Will precinct activation be a real factor in that election?

I hope to continue actively organizing precincts after the midterms, through 2019 and into 2020, so that when the 2020 precinct reorganization comes around, we’ll be much better prepared than we’ve been in years past. I hope to see record-setting attendance, get at least one precinct officer elected to office in every single one of our 151 precincts, and be ready to immediately roll out training and whatever support they could possibly need.

My dream is to have an army of volunteers throughout the county, in every precinct if not every neighborhood, well-connected and well-prepared to hit the ground running to help candidates in the 2020 primaries, and to have a significant impact on the outcome of those races.

Q. Tell us something you think we should know that I didn’t ask you about.

I’m terrible with names! I’m pretty good at remembering faces and relationships and past interactions, but names are my downfall. I’m working on this, and have improved in recent months. But if we meet once or twice and then the next time you see me  I don’t call you by your name, like “Hi, John!,” it’s more than likely because I simply can’t recall it. Please accept my apologies in advance, and just say, “Hi, it’s me, John, remember?” to help me out. This is why I could never be a politician myself, and will always be a behind-the-scenes helper.