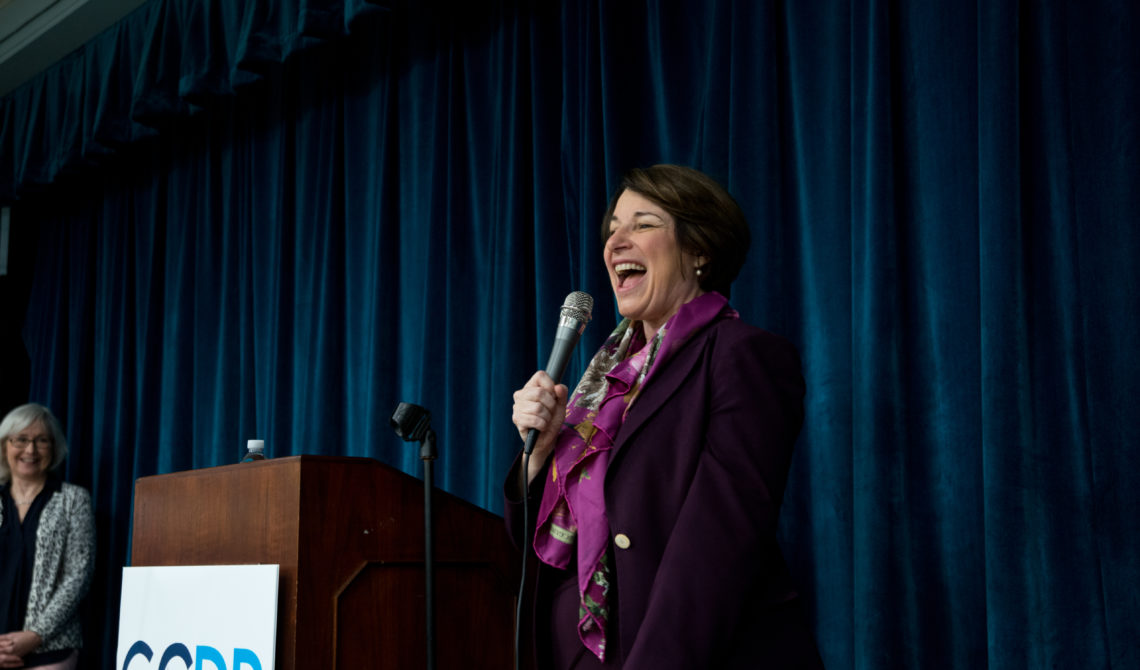 Sen. Amy Klobuchar (D-MN) began her appearance at the monthly GCDP breakfast on a rainy Saturday morning by observing that precipitation seems to be following her campaign everywhere, beginning with the “virtual snow globe” that accompanied the announcement of her candidacy two weeks earlier. Undaunted by Greenville’s foul weather, she dived into a spirited defense of Democratic Party principles and took a few swipes at the Trump administration along the way.

Sen. Klobuchar’s stump speech is an energetic tour of her roots in Minnesota’s historically progressive political environment; passionate support for resuming the progress of the Obama administration on issues like health care, education, immigration, voting rights, and climate change; and a call to “govern from opportunity.” In an obvious reference to the toxic political environment of the Trump era, she challenged the enthusiastic crowd of about 200 to “look up” and engage with one another instead of “looking down at Twitter and wallowing in what’s wrong.”

Recalling how President Trump mocked her – on Twitter, naturally – for announcing her candidacy in a snowstorm, Sen. Klobuchar deftly pivoted from self-deprecating to deadly serious: “He called me a snow woman, and that was funny,” she told her listeners. “But what isn’t funny are statements about ‘both sides’ when nazis and white supremacists are marching in Charlottesville.” Returning to her positive message, the senator emphasized that her upbringing had fostered her focus on common-sense approaches to problems and helped her develop “grit” as a politician. She added that she believes strongly in the importance of Democrats “standing our ground” on core principles while looking for ways to “find common ground.” 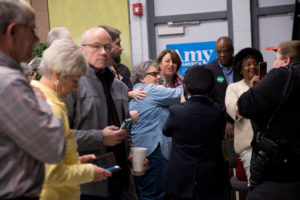 Sen. Klobuchar spoke for several minutes on the political landscape in South Carolina, acknowledging that the state continues to be a challenge for Democrats, but also pointing to the growing strength of the party in the Upstate and dynamic young candidates like Tina Belge. Alluding to the state’s infrastructure issues, she asserted that the Republican corporate tax cut had cost “hundreds of billions of dollars” in lost federal revenues. “That buys a lot of roads and bridges!” she exclaimed to boisterous applause.

Members of the audience reacted positively to the senator’s message, but their comments underscored the benefit of living in an early primary state, which affords the opportunity to meet most, if not all, of the presidential candidates. Nan Johnston, for example, was “very impressed,” but added that she’s “keeping my powder dry because I want to hear every candidate on every issue.” Pat Dilger concurred, saying that she is trying to see every candidate in person so she doesn’t have to depend on edited “media sound bites.”