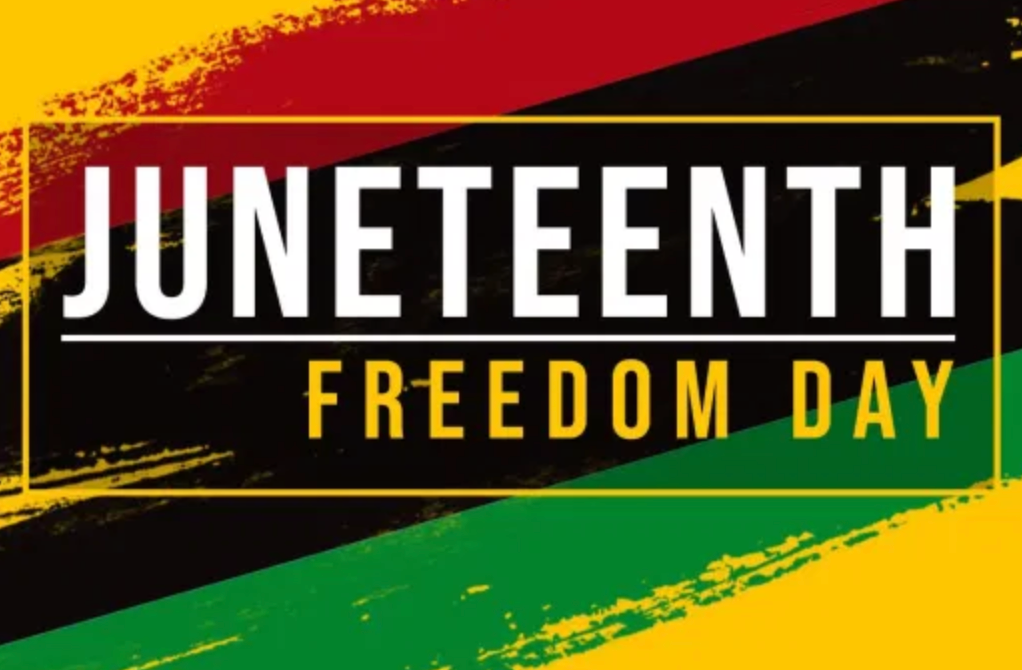 Juneteenth – the 19th of June – has been celebrated as Emancipation Day or Freedom Day. And now a federal holiday. It’s the day African Americans learned that they had been freed by Abraham Lincoln’s Emancipation Proclamation. It took two years for news of emancipation to reach slaves in Texas – on June 19, 1865. Their celebration of freedom began to be celebrated in other states and it is now recognized nationally. To commemorate this day, we asked a diverse group of Democrats to offer their thoughts.

I have so many fun childhood memories of sheer excitement when it was time to go pick out a “Fourth of July” outfit.  My friends and I would window shop with our mothers, longing for the cutest red white and blue outfits that our parents could afford.  Fourth of July cookouts with family and friends, topped off by fireworks were simply the best time of the summer for us.  We never questioned the meaning or legitimacy of the holiday – we just knew it was Independence Day and we celebrated Americans being free. Educators taught us that on July 4, 1776, all Americans were free.

Now as a middle aged African-American woman, I sometimes have to reconcile my feelings of anger and resentment regarding the fact that much of the history that was taught to me throughout my early education either omitted truths, or distorted truths, when it came to African-American history.

So today, as I prepare to celebrate Juneteenth, I replace the red, white and blue flag with the red, black and green flag. My attire is no longer filled with patterns of cute little checkered USA flag symbols and colors.  My head wraps and dress reflect the patterns of my ancestors, the slaves who were not free until 1865.  As I shop for ingredients to make tea cakes, a delicacy created 200 years ago by American slaves, red beans and rice, and red hibiscus tea, I can’t help but to reflect on how intentional traditions are in our country.

The color red is important during Juneteenth because it represents resilience and the blood shed by so many slaves.  “Hot links and red drinks” are a common addition to the Juneteenth feasting.  Thankfully, my family and I now know that while hot dogs, hamburgers, and lemonade are indeed a popular July 4th staple, Juneteenth offers rich traditions and history, and most of all, a sense of belonging.  Yes, it took two and a half years after the Emancipation Proclamation for slaves in Galveston Texas to learn that they were free.  Sadly, it took even longer for African American students to learn the true history of “Independence Day” and Juneteenth.

And as the saying goes, “better late than never”, I look forward to embracing the history and traditions of African American people during our Juneteenth celebrations this week. While I don’t negate the importance of Independence Day in our country, it is my hope that our country soon realizes the holiday doesn’t apply to everyone.  Nevertheless, from this moment forth, Juneteenth will be educated and celebrated in my family as the original “Freedom Day”.

I have always considered myself a history lover and enthusiast. I took AP History in high school and as many college classes as I could. I thought I was well informed. And then I learned about Juneteenth just LAST YEAR. I was shocked and embarrassed to learn of such an important event that I never even knew existed.

I started reading and educating myself, desperate to learn more. The deeper I got, the more I realized how in the dark I was. Why wasn’t I taught any of this in school? Why did the textbooks just leave it all out? I couldn’t believe how much of our country’s history was just erased. My mind started reeling, and I felt so much shame.

At 32 years old, this will be the first Juneteeth that I am truly informed about – something that both excites and pains me. I’m excited to keep learning and to keep educating myself and others. I’m just embarrassed that it took so long to get here.

I will always remember the story of the portrait Barack Obama kept outside the Oval Office during his time as president of a small crowd huddled around a pocket watch, waiting for the moment the Emancipation Proclamation took effect.

On Juneteenth, we celebrate the anniversary of that news of freedom reaching slaves in Texas.

On Juneteenth, we remember our capacity to make real the promise of America’s founding, that thing inside each of us that says our work is not yet finished and that compels us to fight on. For just as the newly freed slaves knew that emancipation was only the first step toward true freedom, just as those who were beaten, maimed, and died in the Civil Rights Movement knew their march was far from finished, we know our work remains undone.

Today we honor the progress of those who came before us and pledge to continue for all posterity.

The social unrest in the United States during 2019 and 2020, the COVID-19 Pandemic, coupled with the rallies and marches of Black Lives Matter makes you think that we are re-living the 1960’s.  The National Election of 2020 and the social justice issues that are exploding throughout the world make some people dream of a utopia.

Some people wonder if Juneteenth is a real holiday.  I know that the Emancipation Proclamation of 1863 freed the slaves descent.  But the people in Texas did not find out about it until June of 1865.  Therefore, they called the day Juneteenth. June 2021 for me; Juneteenth means that black and brown people are still fighting for the right to be treated like a human being.

Americans need to understand that microaggressions in the work place and systemic racism exist today.  Your conscious and unconscious bias effect how you view people of different ethnic backgrounds and cultures.

This holiday should be a time when all Americas finally realize that African-Americans just want to live full and normal lives.  We just want to send our children to nice, safe schools where they do not have to worry about being judged on the color of their skin.  Most children know that the content of their character is one of the most important parts of their personality.

I would love that on this Juneteenth, we try to make the American dream of life, liberty, and justice for all a reality for all Americans regardless of race, creed, national origin, or religious preference.  America is a place where everyone can come and be themselves and not suffer for their own individual freedom.  Let’s make Juneteenth a day of human rights celebration for everyone.

Like so many educated white people, I’ve always considered myself a) well read b) liberal and c) unbiased. The past few years have challenged those assumptions.

I was horrified when I realized that the Tulsa Massacre was not a construct of HBO’s re-imagining of the graphic novel “Watchmen,” but had been an actual historical event. Although current events have broken my heart many times over in the past few years, Tulsa changed something inside of me.

I have always believed that you can advance yourself if you work hard and commit yourself. But I also know that women have to work harder than men. And that African-Americans, Hispanics, Asians and other minorities have to work even harder still. And yet even with that, they were still behind. Still not living in the same neighborhoods I did, not sending their kids to the private schools I went to, not achieving at the same level.

Tulsa and what I learned after showed me the hard truth of our “equality.” The Tulsa Massacre was no outlier. Similar instances have occurred possibly 900 times since Freedom Day. Successful black communities have been burned down; businessmen, educators, political, community, and religious leaders have been driven out, and years of building foundations of prosperity and wealth have been lost. Time and time again.

No, Virginia, we do not start off on an even playing field. Not even close. I wonder what my life would have been if every time my Italian immigrant grandparents had made some inroads with their business – perhaps win a contract away from an established, appropriately WASPy firm – they’d been run out of town. Instead, they built a reputation, a business, became successful, gave my father a foothold he could build upon. Property and wealth have been passed down from generation to generation, allowing each of us to do better than those who came before. Because we stood on the foundations they built.

En masse, African Americans do not have that. Because we took it away from them, changing forever their trajectory and making a mockery of our so-called equality and the American work ethic. Worse, like others, I’m horrified at the lapses in my education and the ignorance I carried around for 60+ years.

To me, Juneteenth is an unrealized promise. We handed out a dream but took away the tools to reach it. I don’t know what I – one old(er) white woman – can do to make amends. But I will do all I can. Knowing what I know now and, in all honesty, that’s all I’ve got.

Every American needs to learn, know, and remember what slavery was in our country. There is no way to move on unless we know what we are leaving behind.  Juneteenth gives us the opportunity to commemorate the end of slavery in the United States and to gather and celebrate the abolition of an evil practice. In the fashion of the indominable spirit of our African American sisters and brothers, let us pray, sing, dance, and feast and never forget their sacrifices.