Home » Blog » Uncategorized » I Have A Dream 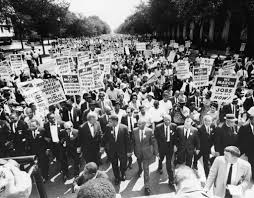 I Have A Dream

Martin Luther King’s “I Have A Dream” speech delivered to the March on Washington in the summer of 1963 is one of the most famous speeches in history.

But the signature phrase might never have been used. According to History.Com, Rev. King had debuted the phrase “I have a dream” in his speeches at least nine months before the March on Washington, and used it several times since. His advisers discouraged him from using the same theme again, and he had apparently drafted a version of the speech that didn’t include it. But as he spoke that day, the gospel singer Mahalia Jackson prompted him to “Tell them about the dream, Martin.” Abandoning his prepared text, King improvised the rest of his speech, with electrifying results.

Here’s a audio recording of this iconic speech with images from the watershed March on Washington.