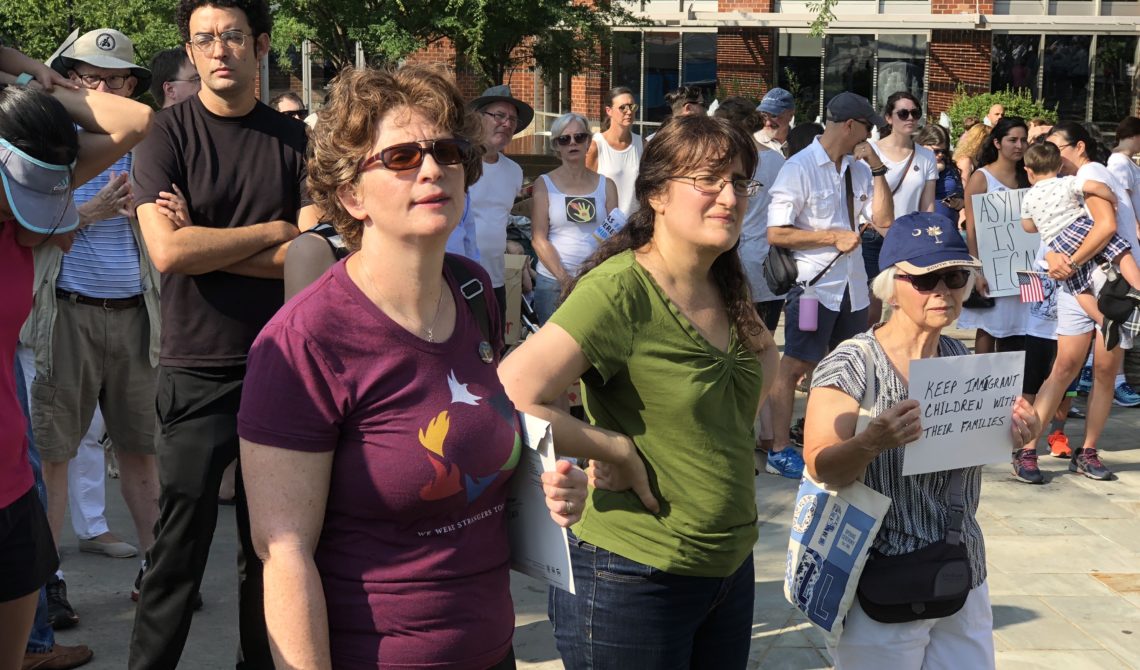 Look to the lessons of the past to secure the future

A diverse cross-section of Greenville came together Saturday, June 30, to the Families Belong Together protest to call for an end to the Trump Administration’s “zero tolerance” policy and to demand fair, decent, and lawful treatment of all asylum seekers and undocumented immigrants. Among the many voices was Melinda Menzer, a Ph.D and professor of English at Furman University. Dr. Menzer reminded us that immigrants have not always been welcomed in the US – policies the country has come to regret. It was a powerful reminder, reprinted here.

The Declaration of Independence states, “We hold these truths to be self-evident, that all men are created equal, that they are endowed by their Creator with certain unalienable Rights, that among these are Life, Liberty and the Pursuit of Happiness.” That’s a statement of belief — it says that an American is a person who believes that all people are created equal, that all people have the unalienable right to life, liberty and the pursuit of happiness.

The United States has been strong and prosperous when our actions have lived up to those words. The Statue of Liberty stands at our shore, a tangible symbol of that belief, that all are welcome, that all are equal, that all are entitled to freedom.

But we know our country has not always lived up to that beautiful, self-evident truth. The man who wrote those words owned other human beings, denying them life and liberty, ignoring our fundamental equality. We paid a terrible price for our hypocrisy. We are still paying a terrible price.

And we have failed at other times. For the first 150 years or so of our country’s history, we welcomed the immigrant with few restrictions. But 100 years ago, in the 1910s and 20s, at the time of the first America First movement, we turned away from our core belief in equality. We decided that the immigrants and refugees trying to come to this country at that time were the wrong kind of people. They were Jews and Catholics. We called them criminals and anarchists. We set up a quota system that permitted more immigrants from Protestant-majority countries and few from Jewish or Catholic-majority ones. We required visas and made them difficult to get.

It was this system that meant my grandfather was permitted into this country, while his parents and siblings were not. My grandfather held a passport from a Protestant-majority country which had a large quota. His rest of his family had passports from a country with a very small quota. And when, to no one’s surprise, the Nazis invaded their town in 1941, they were brutally murdered. They had nowhere to go.

Those who died were people just like me. They were my family. We could have saved them. Americans were petitioning Congress to save them and people like them. In February 1939, Senator Wagner of NY and Representative Rogers of MA introduced the Child Refugee Act, which would have allowed the entry of 20,000 refugee children, ages 14 and under, from Germany and German-occupied territories into the United States above the already set quota. But it didn’t pass. We didn’t take the children. We felt no responsibility for foreign children.

Raise your hand if you know the story of Anne Frank. How many of you know that a year before Anne started writing her diary, her father started trying to get US visas for the family? We have his correspondence. He wrote again and again, to officials, to family in the United States, to everyone he knew. But he was denied. They didn’t go into hiding in the Secret Annex because they thought it was their best chance of survival. They went into hiding because we denied them refuge.

I don’t know how many times I’ve heard a speaker ask an American audience, would you have helped Anne Frank? Everyone always says yes, yes, of course. But we didn’t help her. She wasn’t Anne Frank then. She was just a Jew, a criminal, a foreign child.

But, my friends, here’s the good news. This is your opportunity to help Anne Frank. She’s out there. She’s in Syria, in Yemen. She’s in Honduras, in Guatemala. She’s behind a chain-link fence, separated from her parents, somewhere on the border. Maybe my father’s little cousins are with her.

There are those who call her a criminal, a terrorist. But we know the danger of believing those lies. We know the truth, “that all men are created equal, that they are endowed by their Creator with certain unalienable Rights, that among these are Life, Liberty and the Pursuit of Happiness.”

And we know how to make America great again — by welcoming them in.

I’d like to end with the words of a great Jewish American poet, Emma Lazarus, who wrote these words in 1883, before the time of the quotas. They are engraved on the Statue of Liberty, the Mother of Exiles:

With silent lips. “Give me your tired, your poor,

The wretched refuse of your teeming shore.

Send these, the homeless, tempest-tost to me,

I lift my lamp beside the golden door!”

Photo: Dr. Melinda Menzer, left, after delivering a moving speech on remembering our past to secure our future.