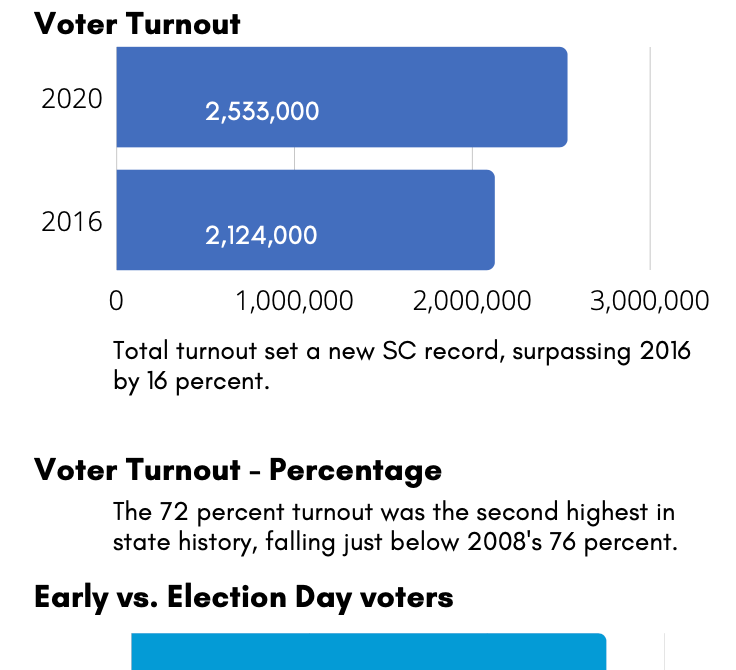 2016 in how Greenvillians decided to cast their vote.  Absentee voting was expanded this election to include the “State of Emergency” reason, under which all eligible voters could choose to vote absentee.  As a result, we saw an incredible increase in absentee voting in Greenville County.

Additionally, an unprecedented number of voters (approximately 46,000) requested mail-in ballots, and around 45,000 of those ballots were successfully returned. 12,500 of the mail-in voters chose to return their ballots in-person.  The increase in absentee voters led to additional teams being formed at the Election Commission in order to group workers together whose jobs were focused on manning the phones, responding to emails, and collecting ballots.  The Commission’s absentee team grew from three workers to 70 workers.

An incredible number of community members also stepped up this election to serve as poll managers and poll clerks for the county.  The Election Commission received so many applicants they had to create a wait list.

Although the absentee voting option was so widely used in Greenville and across South Carolina this year, the “State of Emergency” option was only a temporary measure.  Hopefully the members of the Legislature will see how beneficial no-excuse absentee or early voting could be in South Carolina, and will expand it for all future elections.  However, I believe it is safe to assume they will not voluntarily do so, and any expansion of voting in South Carolina will require significant pressure from citizens.