This profile of Judi Buckley, candidate for State House District 17, is one of a series on Democratic candidates running for office who are not currently incumbents, designed to help voters understand who they are and what they stand for.

In September 2017, when Hurricane Irma hit the US Virgin Islands, Judi Buckley and her husband, monitored conditions from their home in Taylors. As a former state senator in the Virgin Islands, Judi had resources to reach out to. Quickly, she decided to fly out and help with the relief and recovery efforts. Her husband, Jeff, a retired Air Force colonel and now a FEMA contractor, was later deployed to Puerto Rico.

Her response is typical of her focus and tenacity. 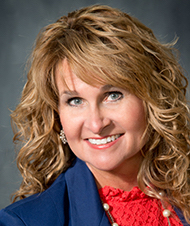 With deep Southern roots, Judi was raised in a missionary Christian family from Alabama. While they relocated multiple times, Judi’s steel-magnolia, southern-bred character is familiar to South Carolinians.

In a time when women are often head-of-household and need better wages, healthcare, and security for their families, Judi is focused on the rising cost of inflation, dealing with a failing education system, and putting a focus on the opioid crisis.

Defined by traditional values and courage in times of adversity, Judi is a listener whose campaign is focused on building on a strong foundation in the Upstate and giving residents a hand-up as their community grows and changes. Taught as a child to put others first, Judi brings a lifetime of service backed by a history of accomplishments.

In the early 2000’s, when Judi’s hometown experienced a rash of crime, including home invasions and violent assaults, she started the first neighborhood watch in the area.

At the request of the police commissioner, she helped bring residents, law enforcement, elected officials, and public service leaders together to form the Citizens Integration Team. They worked to find solutions and bridge the gap between the community and law enforcement.

Her efforts gave her a public image and put her in front of legislators regularly. She asked for resources, presented solutions, and implemented them. Eager to do more to prevent crime, she co-founded a local chapter of Crime Stoppers, an international non-profit tip line.

Later, as a senator in the Islands, Judi turned her attention to investigating spending, analyzing public education, and sponsoring legislation to help improve learning in schools.

Judi’s personal experience has also been one of sacrifice and service.

As a military officer, Jeff served for 10 years as chief of staff for the Virgin Island Air National Guard.

Judi knows what it means to be a young mother. As a young college student, an unexpected pregnancy gave Judi a loving son. Today, her two grown children are among her most ardent supporters and best friends.

Judi also knows the personal pain of the opioid crisis, having lost her sister an accidental drug overdose just a year ago.

These experiences give Upstate voters the benefit of a representative who personally understands how to overcome adversity.

Judi could have stayed home last year when she learned a second hurricane would hit St. Croix head-on. She considered the risks but chose to act, arriving two days before the storm hit the Island.

Covered in dirt every day and not always knowing where she would get food or shelter, Judi persevered. She cleared supply shipments, bagged items, and delivered relief supplies door-to-door, often after hours when others faced curfew restrictions.

“Thank you for being there for us in the VI last year. Since my home wasn’t livable after Maria, I’m now on the coast of NC. It’s kind of comforting to know you’ll be nearby after this one, too,” said a storm survivor on Facebook. “In case anyone is wondering, Buckley was on the ground with us, helping feed people and fighting for the right of relief workers. Without her pressure, some people, including my husband, may never have been paid for their hard work.”

For South Carolina, Judi will fight for adequate and equitable funding for public education, revisit Tax Act 388 and propose an amendment to take funding off of the backs of small businesses, landlords, and vehicle owners. She wants to eliminate obstacles that keep women out of the workforce, and fight to prevent hunger among seniors. She will champion affordable housing and work to find ways to fund public transportation.