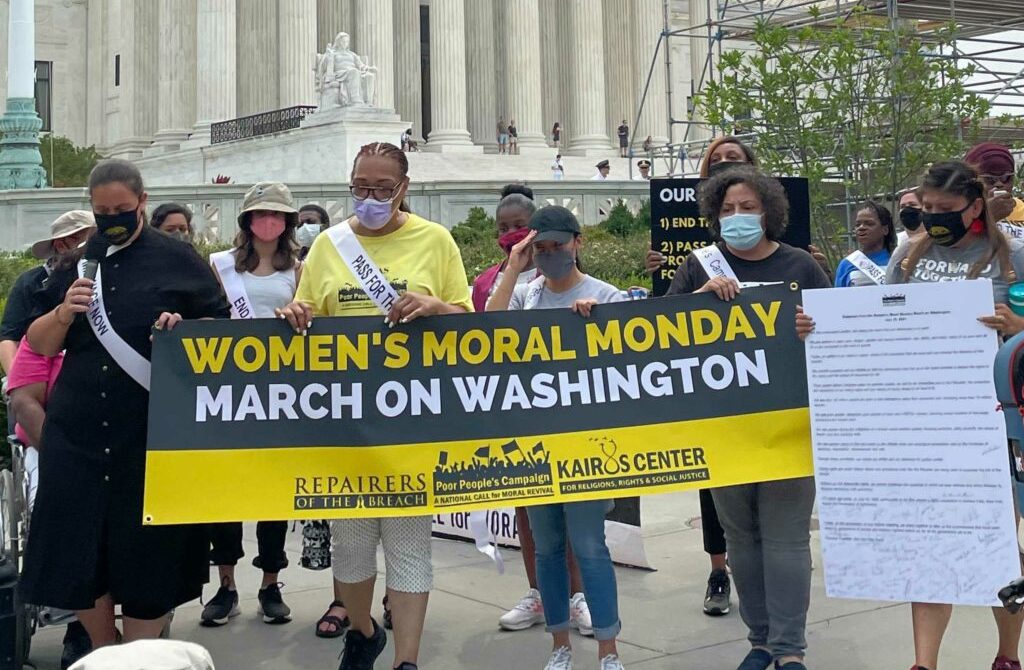 On Monday, August 2, Rev. Susie Smith and Jalen Elrod will join hundreds of activists in a March on Washington, D.C. This march is part of the Poor People’s Campaign’s Moral Monday’s protests that are taking place around the country and will culminate next March in a massive March on DC. The Monday march brings together low-wage workers and faith leaders to call for action on voting rights and workers rights.

Jalen Elrod and Rev. Susie B. Smith will participate in the Poor People’s Campaign National Moral Monday Action on August 2nd in Washington DC.  Susie does so as a follower of Jesus of Nazareth and an ordained United Church of Christ minister. Jalen is an Ifa-Orisa practitioner and community activist. (Editor’s Note: Jalen is also third vice chair of the South Carolina Democratic Party).

This is the  fourth week of the “Season of Nonviolent Moral Direct Action” called for by the Rev. Dr. William Barber and the Poor People’s Campaign. We march as an expression of our lifelong commitments to do whatever we can for as long as we can to move toward the dream of a democracy that includes and is for  “all the people” and not just “some of the people.”

Thousands are expected to gather for this rally and non-violent direct action led by poor people, low-wage workers and faith leaders from 40+ states during this week that marks the 56th anniversary of the signing of the 1965 Voting Rights Act.

We join with Rev. Dr. William Barber and the Poor People’s Campaign in proclaiming that this is indeed the time for a resurrection of nonviolent moral direct action rather than becoming complicit to the continuing insurrections of immoral violence.

The Poor People’s Campaign has issued a call specifically upon the US Senate and the White House to:

Our nation continues to witness attacks on people of every race, creed, income, gender, sexuality, ability and identity. The attempt to pass laws to suppress the vote in state after state across our nation is but one more attempt to ensure that wealth, privilege and power remain in the hands of a few.

Rather than guarding the privilege of the few, Jesus of Nazareth and  the great prophets of all faith traditions call upon us to share power, wealth and all the resources that have been entrusted to us.  We still believe in the vision of a Beloved Community filled with justice, mercy and compassion for all. We march on Monday to remind ourselves that we cannot become complicit with the increasing  hostility, hatred, violence and division that tear at the fabric of our society.

We join the Poor People’s Campaign’s Season of Direct Action hoping to strengthen the resolve of local, state, and national officials who are committed to protect voting rights and economic justice for all.  We march to stand in non-violent opposition to those who oppose these basic democratic principles.

Jalen and I humbly ask for your prayers to help us stay centered in the “Principles of Nonviolence” modeled by Gandhi and the Rev. Martin Luther King. On Saturday, we participated in a nationwide virtual training  to help ground us in these principles and begin building a solidarity with those with whom we will march.

We also also ask for prayer that the winds of the Holy Spirit will blow through the halls of Congress and the White House and out to the state houses across our land to bring the moral courage and strength our leaders will need to become representatives of all the people of our country.

Finally, we express our gratitude to church members from Triune Mercy Center and friends from the community who have made donations to help make our trip possible.